South of the Alps, against the backdrop of the lake and the snow-capped peaks, you can cycle nearly all year round and there’s nothing to stop you from enjoying a drink in the sun. Amid the vineyards, rivers, woods, and mountains, there’s no shortage of official trails for all seasons in Ticino.

Round a bend to the right, another to the left, a few strokes of the pedal so you don't lose your rhythm, and then down that descent between the two trees. Soon, you should reach the viewpoint. With the excuse of taking a selfie, you can stop to catch your breath, maybe munch on an energy bar, and set off again to explore the Ticino trails.

The colored leaves of the trees that surround you make the outing an unforgettable experience and almost make you forget the fact that summer is long gone by now (and soon autumn too) and that snow has already arrived on the highest mountains. To tell the truth, the crisp air helps bring you back to reality a bit, but the weather is still another important reason that prompted you to leave the blanket on the sofa, get properly dressed and out of the house, bring your bike on the train, and head to Ticino.

The friends you go mountain biking with have always told you “In Ticino, you can ride nearly all year round. Once, I was at the central station with my bike and everyone else around me had boots and skis over their shoulders." But you were skeptical: it's in the south of Switzerland, sure, but it's hardly an island in the Mediterranean! But then an autumn that kept you shut in at home early convinced you: why not give it a try?

5 REASONS WHY IT'S WORTH IT 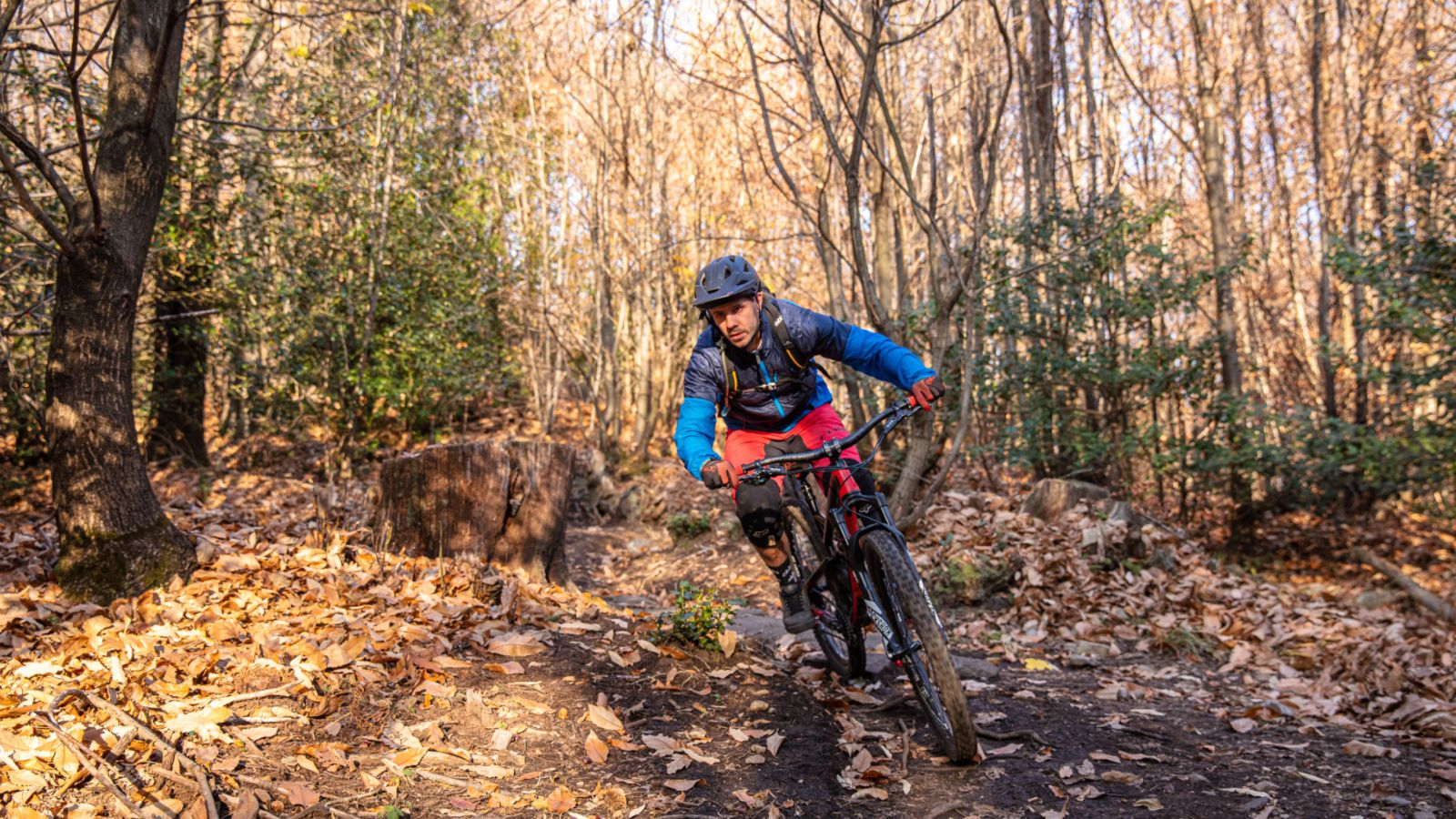 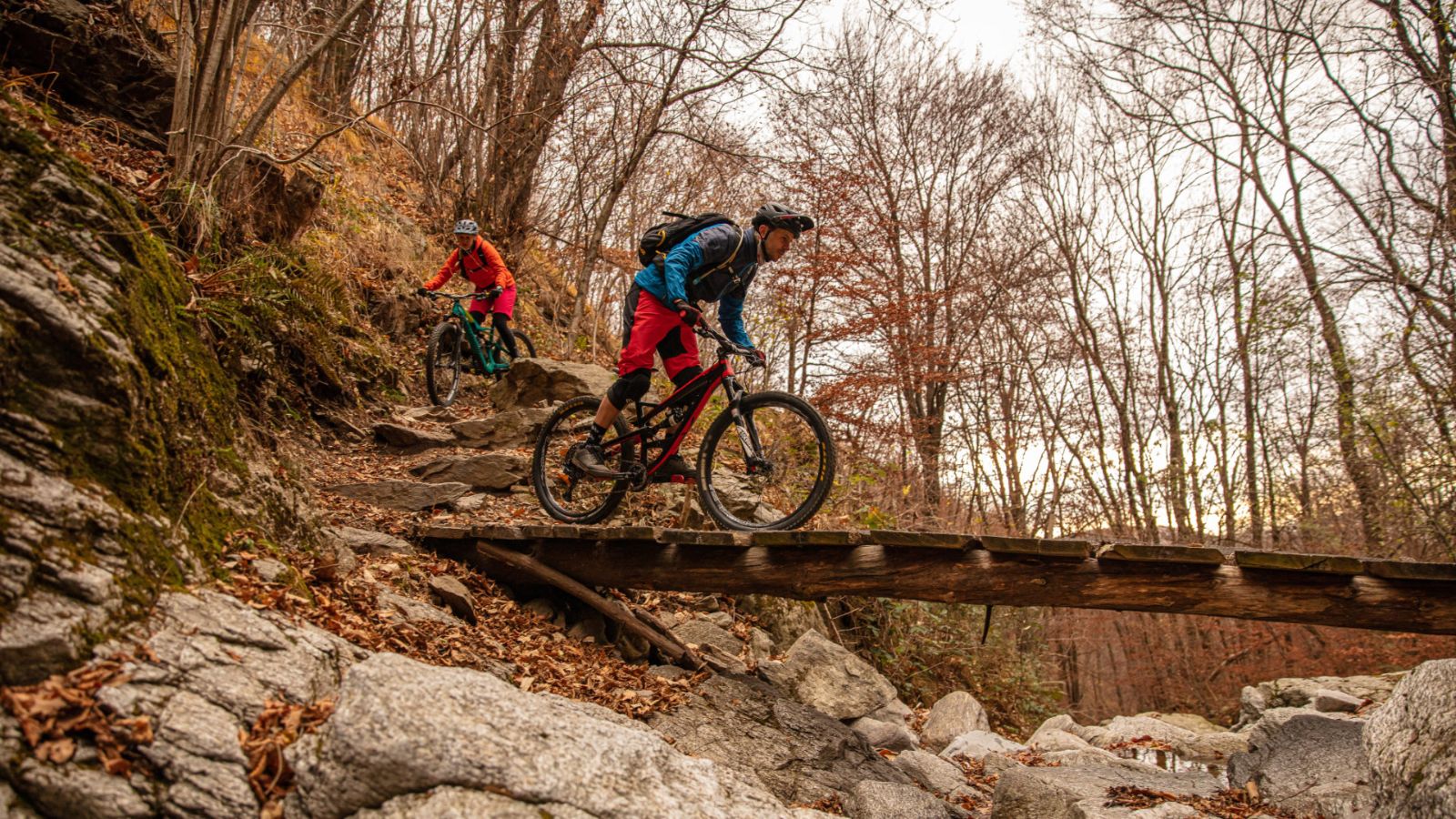 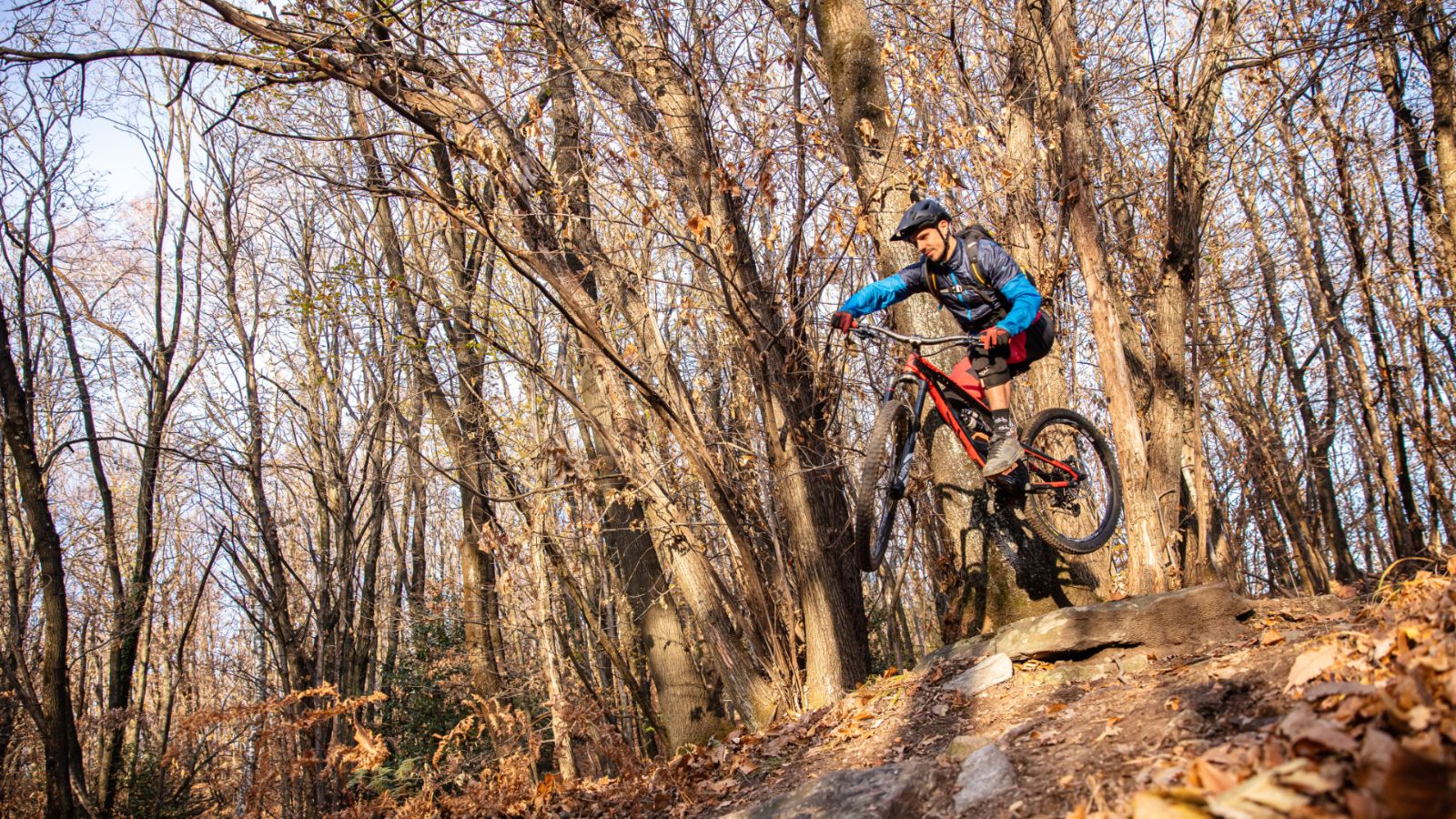 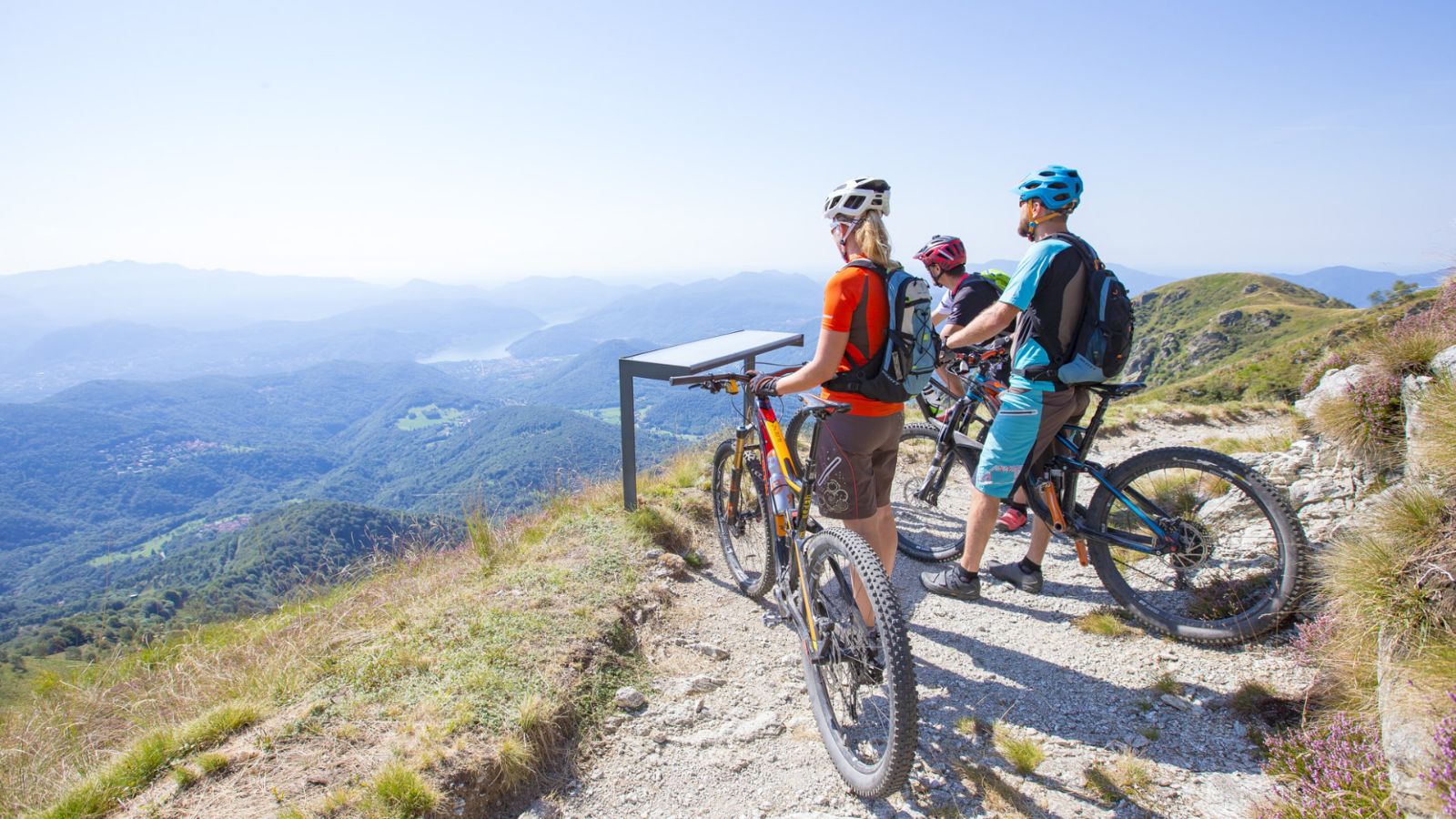 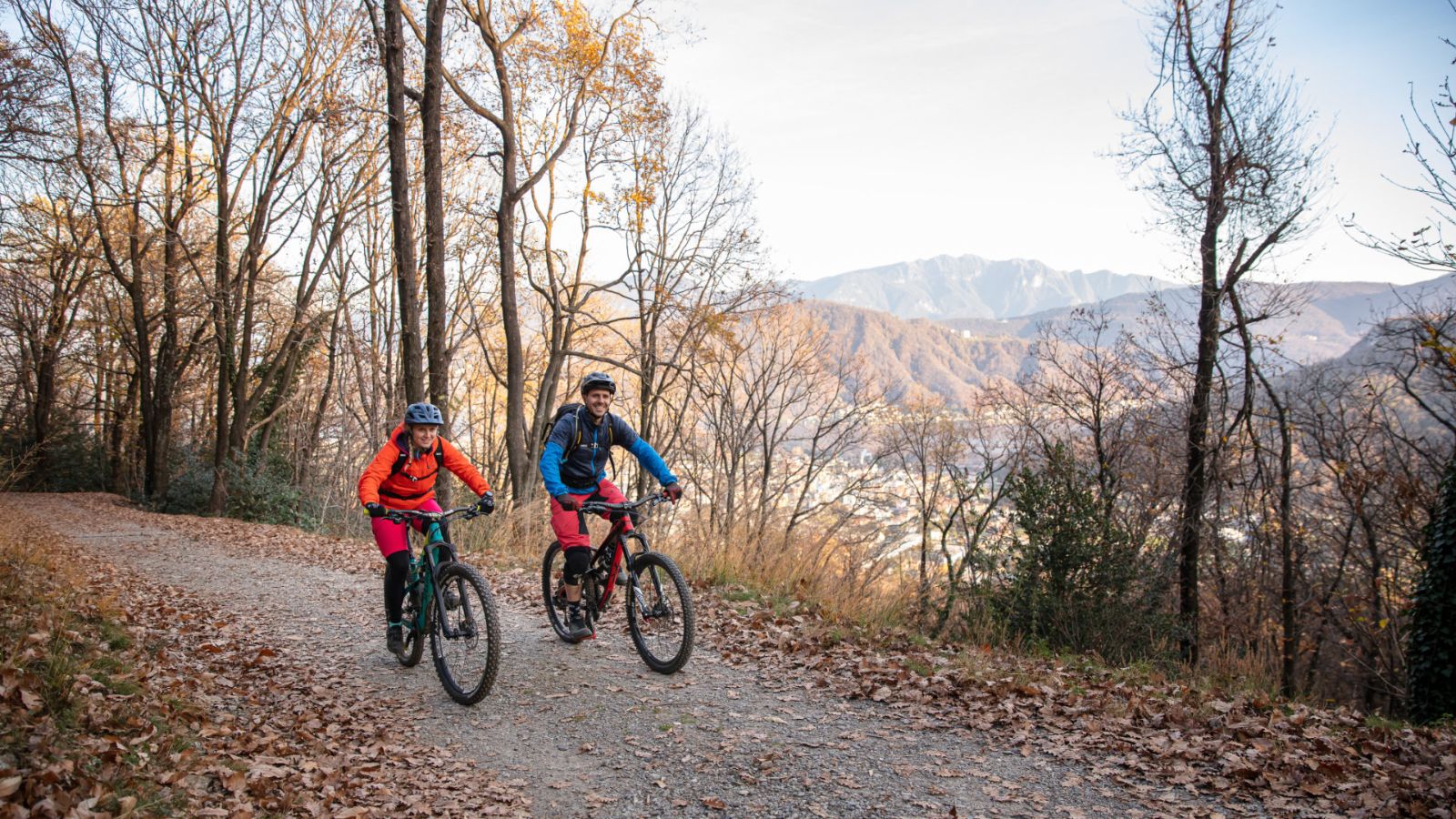 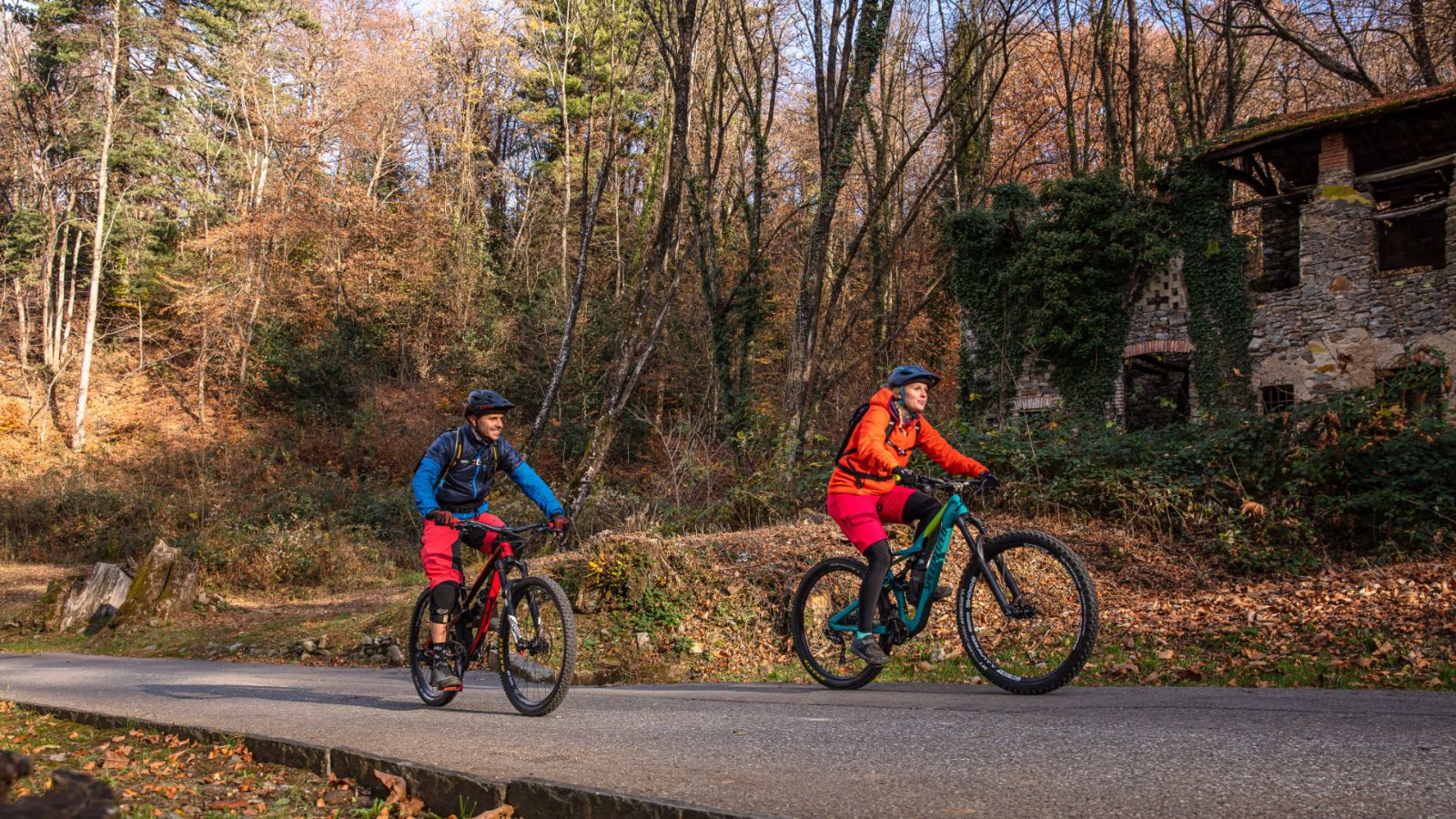 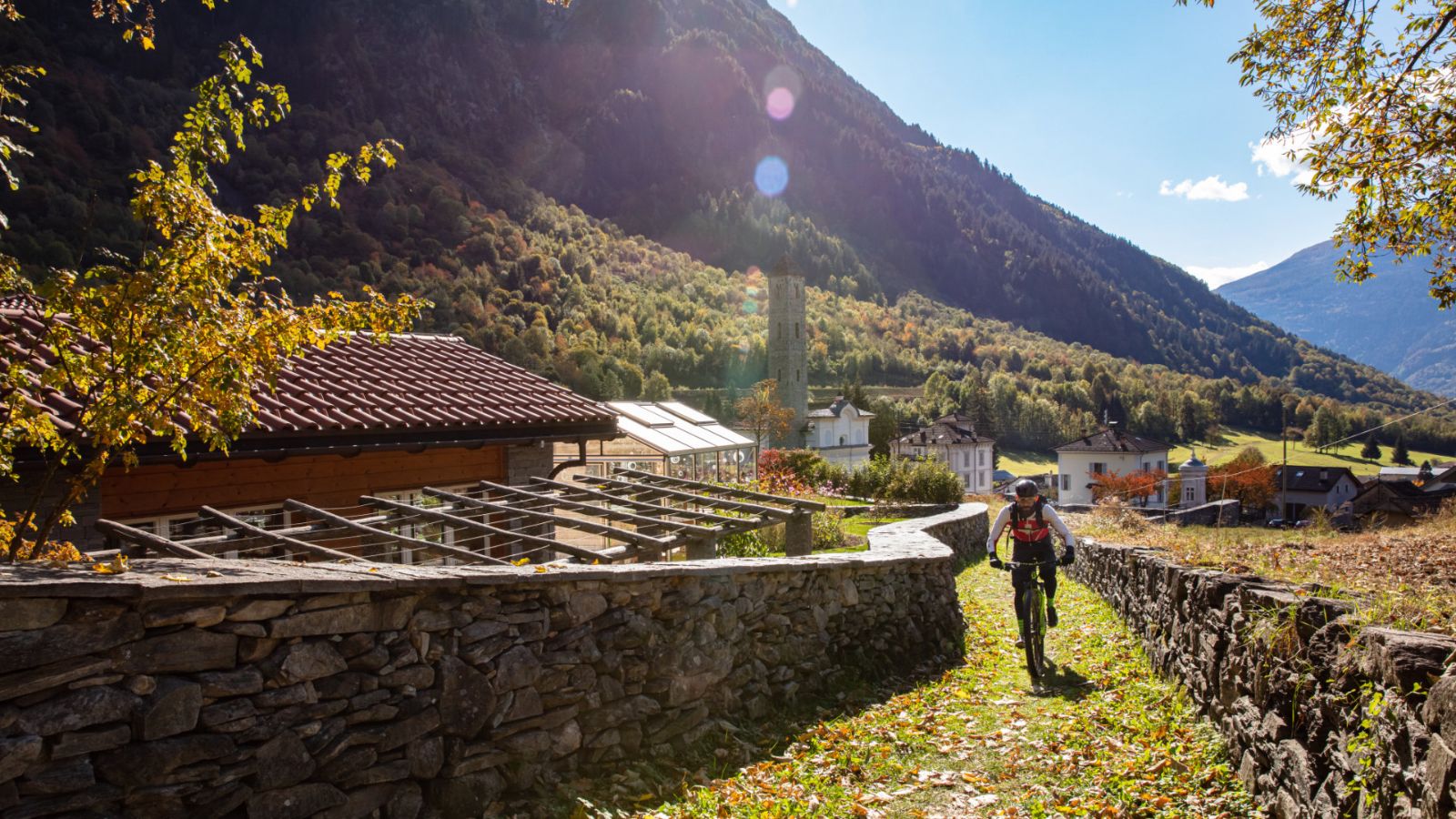 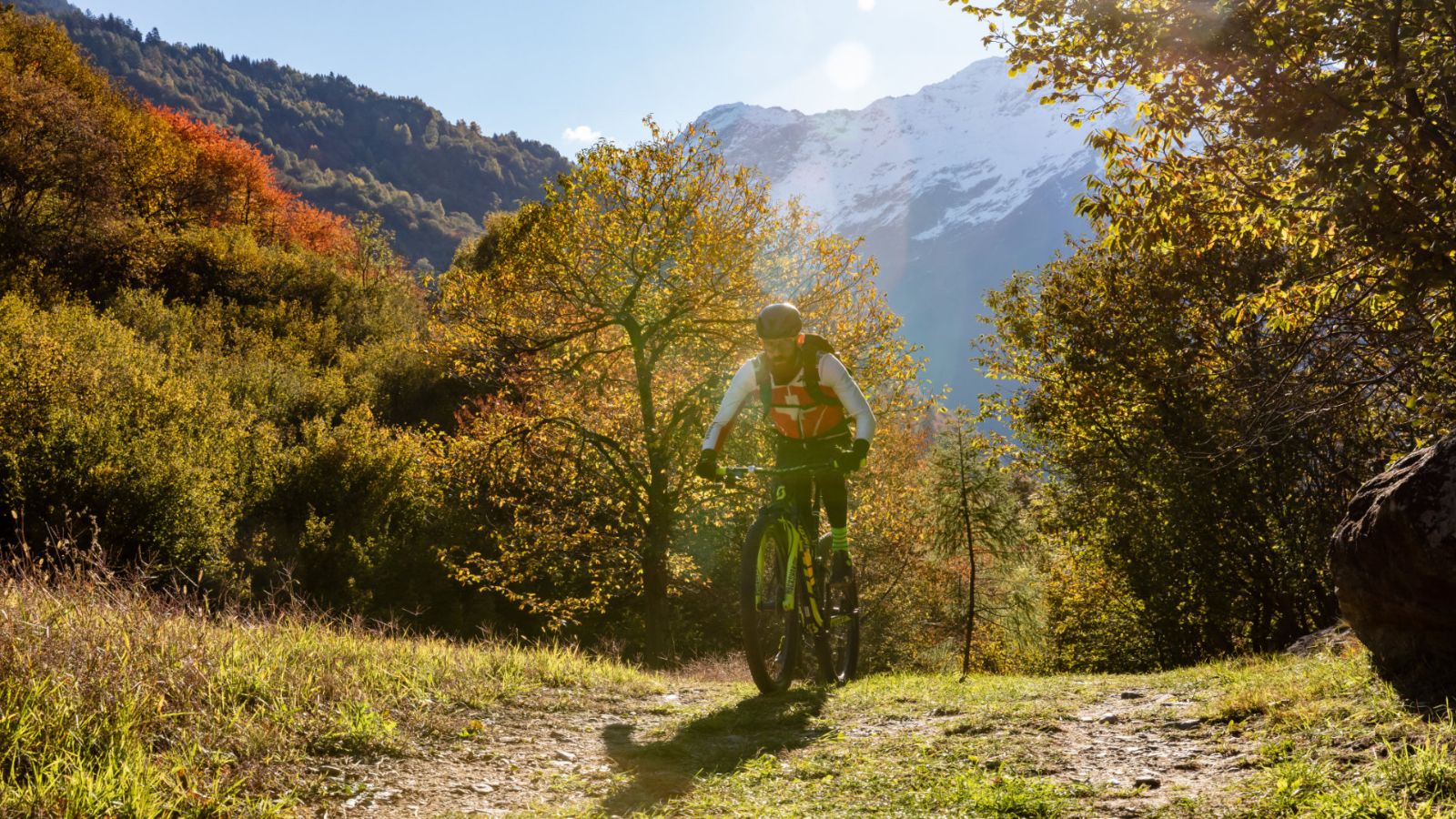 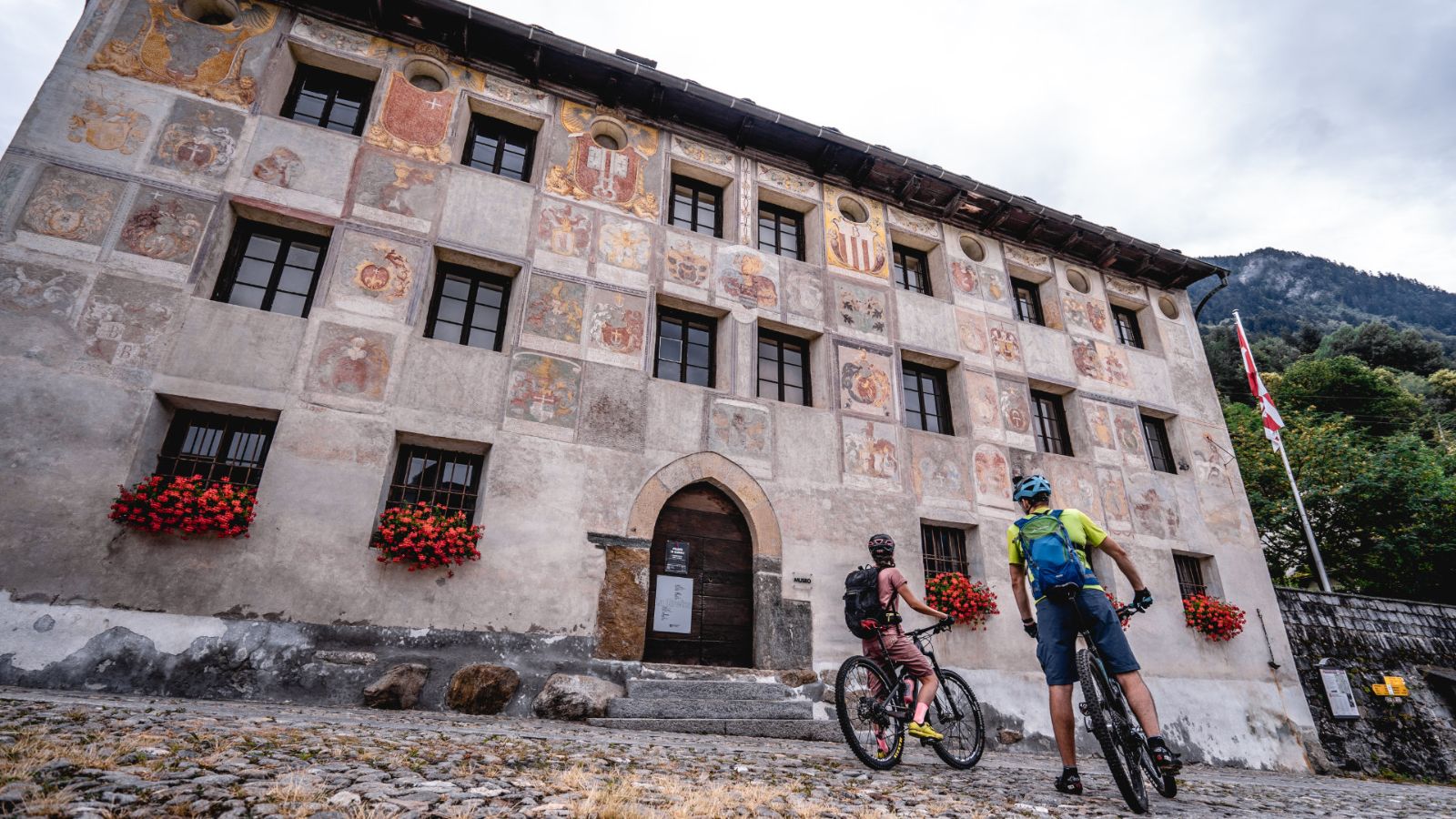 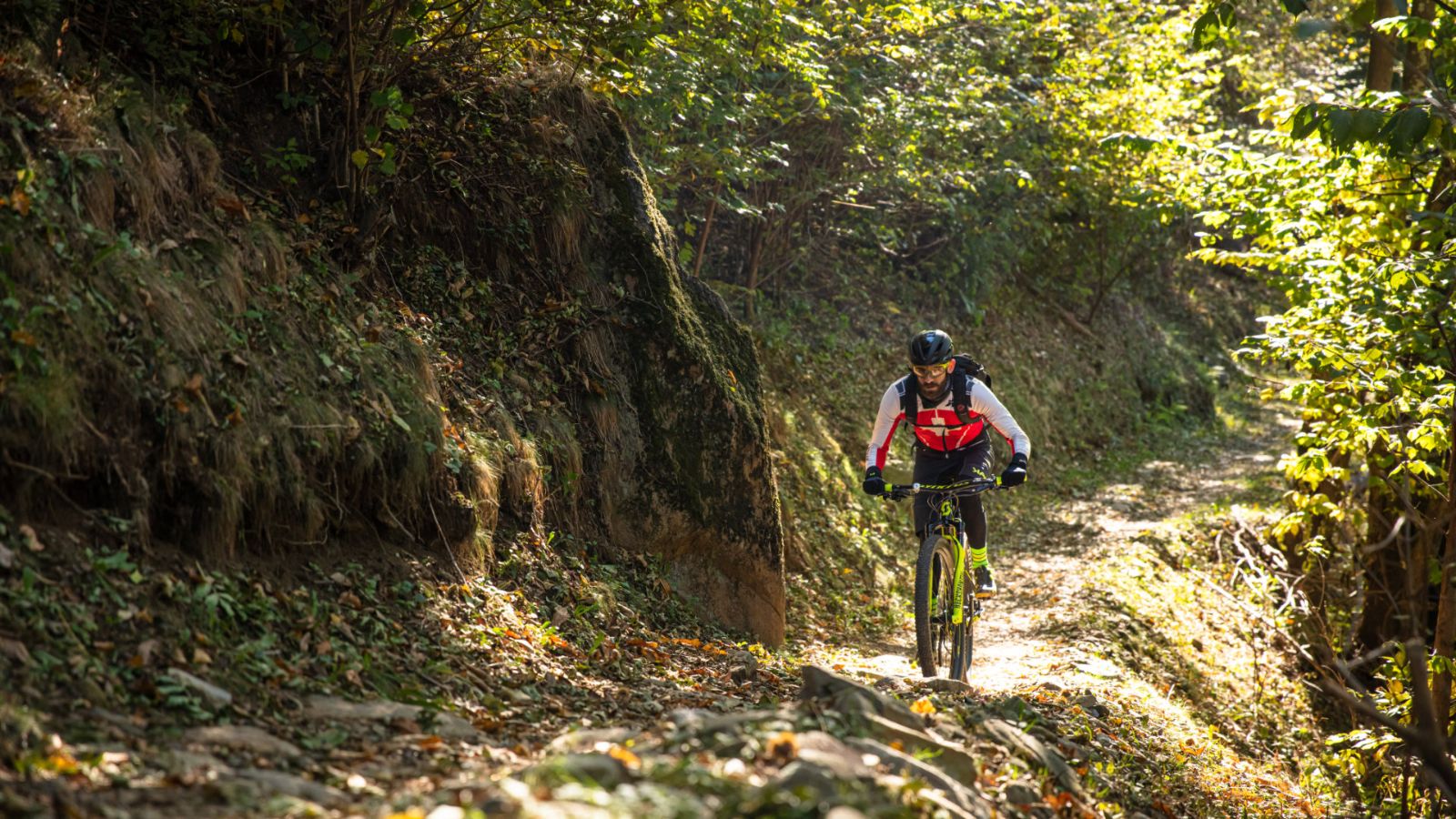 No bike? No problem. In Ticino, there is no shortage of specialist shops where you can rent a bike or book a guided excursion.

And while the cold has arrived back home and some destinations are already under a white blanket, in Ticino, the autumn sun is still high in the sky and most of the routes are still snow-free. This really is a dream come true for anyone who loves mountain biking.

You consulted reference sites and apps and found the right choice for you: official routes of various levels of difficulty, which wind through colorful chestnut or beech woods. Climbs and descents, single trails, or dirt tracks: there’s no shortage of action and there’s always somewhere to enjoy breathtaking panoramic views as well.

But now the trail has come to an end and it's too late to tackle another one. Leave sport for tomorrow, now why not recharge your batteries with a trip to the spa before heading back to the hotel? Later, you’ll be meeting up with other mountain bike enthusiasts in the restaurant recommended by a friend of yours, the one who hops in the saddle and heads to Ticino whenever he can.

Some people wait for June to go out with their mountain bikes. But in the south of the Alps, there is a huge range of options for cycling in all seasons: your bike probably won't get put into hibernation this winter.

Food festivals, Christmas villages, concerts, and much more: there is no shortage of events to enrich your stay in Ticino.

As we bounce and jolt down the Gotthard massif, we are shaken more vigorously than on a Crazy Fit vibration plate.

If you are either by bike or by MTB, Ticino is a cycling paradise. And also the followings hotels think this way. Discover tempting
offers for a stay on two wheels.

Shooting down a red piste, admiring a white landscape

A balance between Art and Style