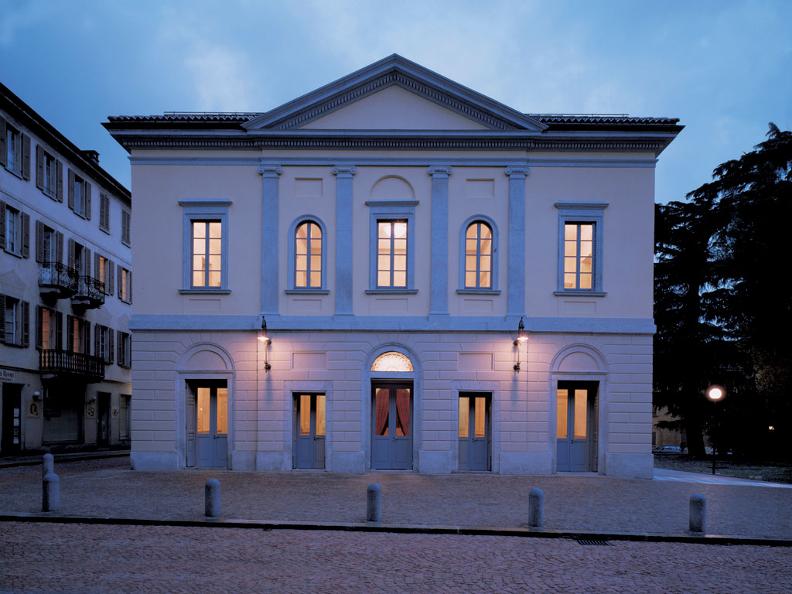 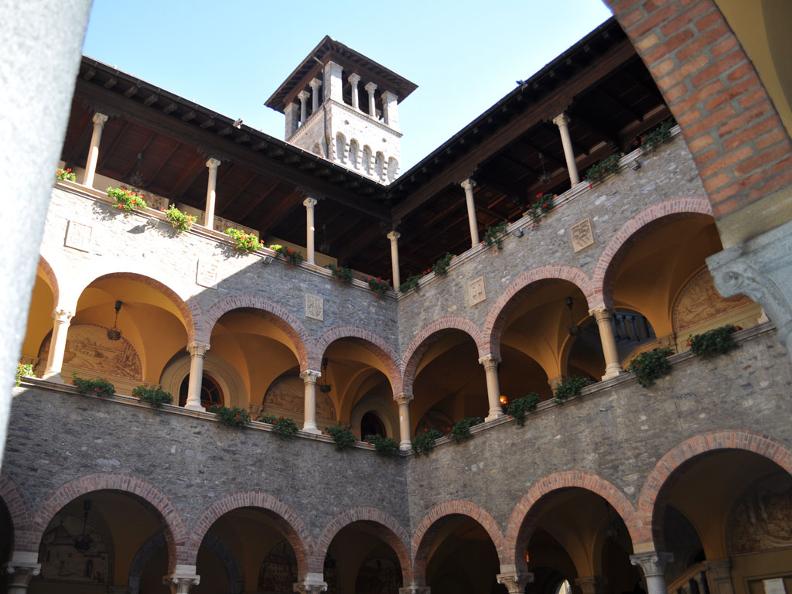 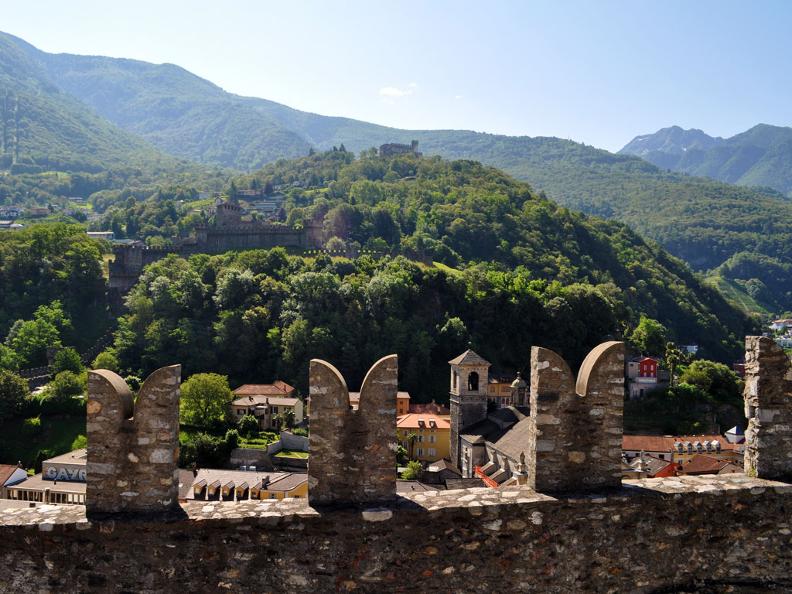 The real heart of the town is Piazza Nosetto, where the old Strada Francesca once forked off to the gateways of Porta Nuova in the direction of Locarno, Porta Codeborgo leading northwards and Porta Camminata leading southwards. Today the square with its arcades is a tranquil place but some of the noise and bustle of former times returns with the Saturday market and the Rabadan Carnival. It is also home to civic institutions which are all concentrated around the inner courtyard of the Town Hall v, a splendid three storey building dating from the 1920s but which surprises for its more ancient appearance. Episodes from the history of the Town Hall and the town are portrayed in the graffito lunettes by Baldo Carugo that decorate the loggias.

From Piazza Nosetto, Via Teatro w leads to the Teatro Sociale x, built and designed by the Milanese architect Giacomo Moraglia in 1847 and a rare example of Italian theatre style in Switzerland. It’s construction necessitated filling in the moat of the ancient gateway and a part of the Murata or town wall, whose former position is marked by grey cobblestones in the red porphyry road surface. Closed down in 1971 the theatre was listed as a national monument in 1989 and later restored by the architects Pia Durisch and Aldo Nolli.

From the square there is a fine view over the famous seal fountain and across to the Palazzo delle Orseline y, built originally as a convent in 1738 and permanent seat of the Cantonal Government and Parliament since 1878. Following the stretch of the Murata along via Dogana and Via Camminata you come back to Piazza Nosetto.

Walking northwards through modern Piazza Magoria, where the Museo in Erba (children’s museum) is situated, the street of the same name takes you into Piazza Collegiata which is lined with patrician houses dating from the 1700s. An imposing flight of steps leads up to the portals of the Church of Saints Peter and Steven V, built from 1517 and completely restored between 1980 and 1999. Just north of the church is the start of the modern shopping street Viale della Stazione, which is connected by the Galleria Benedettini to Via Codeborgo, a narrow street leading to Piazza del Sole.

To enjoy a view of over the whole of Bellinzona and the surrounding area, we suggest you leave the centre and follow one of the various routes that climb up to Sasso Corbaro castle. From the tower there is a unique view over the fortifications and the region reaching down to Lake Maggiore. The most direct route to reach the Castle, also known as Castello di Cima (the top castle), starts from Piazza Collegiata and leads up through Salita alla Motta to Montebello Castle before climbing further. For a less demanding climb take the Salita della Nocca and Via Sasso Corbaro which takes you past the Madonna della Neve Oratory. Nearing the castle, the road joins Via Predella which takes you to Daro. The first stretch is on level ground and affords magnificent views of the confluence of the Riviera and Mesolcina valleys, of the northern districts of the town and of the town centre, which can be reached by walking down Via ai Ronchi or Via Malmera.