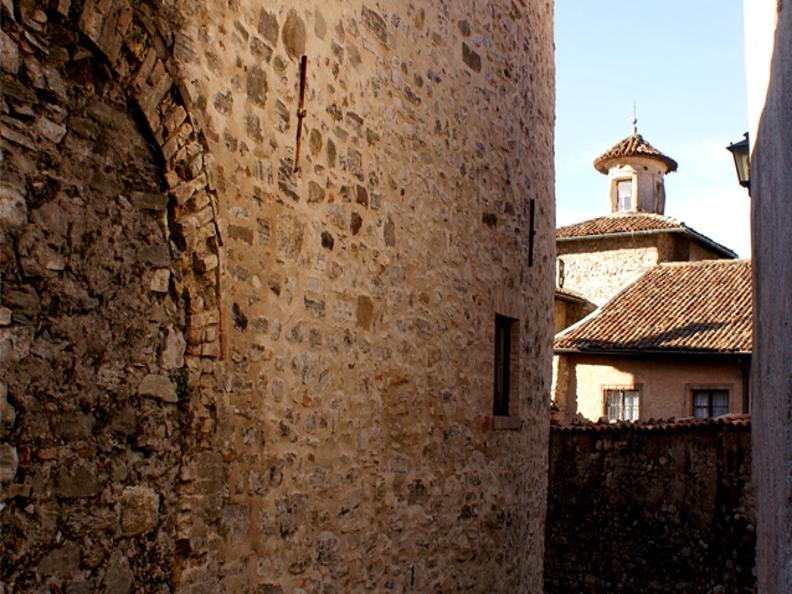 The small church of Santa Maria is in the oldest part of Mendrisio. The lane leading to the church is paved with cobblestones, which is all that remains of the original paving in the historic centre and is thus of great historic value. The church of Santa Maria has a very old feel to it, like the narrow streets in the immediate vicinity. The original Romanesque church has been altered greatly over the years. All that remains is the bell tower (raised in the 17th century) and possibly the nave. The interior has a single central nave with a frescoed ceiling by Angelo Sala depicting angels in flight.

On the right of the nave there is a small chapel dedicated to St. Carlo. This has a particularly fine cupola. Elliptical rather than circular, it is decorated with intricate stucco cornices in the Baroque style with shells, horns of plenty and fruit.

The altar niche contains a beautiful statue by Agostino Silva of St. Carlo Borromeo. This skilfully depicts him in ceremonial robes as he advances, blessing the people. The putti on either side give you the impression of being embraced by such piety. The niche in the wall on the left holds an unusual Madonna del Pianto [Weeping Madonna], almost in the Expressionist style with her features twisted by suffering. Normally the Virgin Mary is shown with smooth resigned features, despite her pain. The main altar is in the Baroque style, with white stucco and gold leaf. The altarpiece depicts the Nativity of the Virgin.

Archaeologists found major sections of an old Roman mosaic next to the church in 2002, belonging to a large Roman villa from the 2nd or 3rd century A.D.