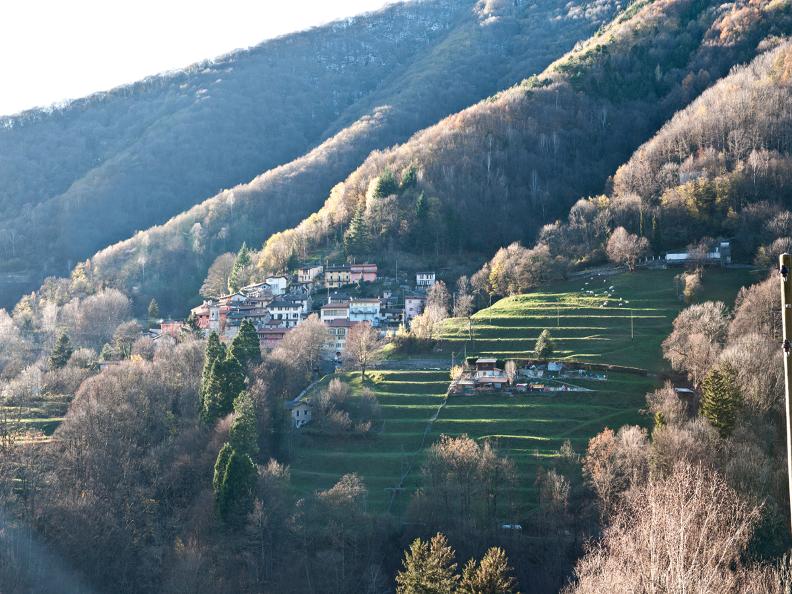 618 metres above sea level, Casima is a settlement on the right bank of the Breggia river. Probably established during the Middle Ages, and mentioned for the first time in 1507, it was dependent on Cabbio until 1805, when it became an autonomous Commune. Some time before that, two communities had already separated from a religious point of view, with the creation of the parish of Casima in 1788, and elevation to the status of a parish church of the church of the Addolorata and San Carlo Borromeo, which was rebuilt in the neo-classical style starting in 1789, incorporating an older building (which was already known in 1619), and was consecrated in 1823. The Traversa Alp, the remains of which are now invaded by vegetation, formed part of the territory of the former Commune, which, starting in the second half of the 19th century, saw its population reduced drastically from 149 inhabitants in 1850, to only 34 in 1980.

This trend now seems to have stopped, partly because of the new residential vocation assumed by Casima which, since 2004, together with Monte and Campora (a former outlying district of Caneggio), has formed part of the Commune of Castel San Pietro. Rearing of sheep and goats is the only traditional rural activity which is still carried out. All traces of cereal and potato crops on the crags, felling of wood and production of carbon for export, and the extraction of schist and marble from the local quarries which closed in the first half of the 20th century, have been lost. All of these were activities which constituted the pillars of the fragile economy of the country together with the emigration, which was firstly periodic, then after 1850 to the Americas.

Casima is also an example of how the settlements of the right-hand side of the valley (as well as at Monte and Campora) were dependent from an administrative point of view on those of the left-hand side (Caneggio, Bruzella and Cabbio), and were connected to them by means of an old network of paths at the bottom of the valley, such as, for example, the one which crosses the river at the Punt da Campura, constructed around the mid-18th century and restructured in 1994, and which connects Caneggio to its former outlying district. In fact the scarcity of land led the communities in the valley to build compact settlements and establish plots a various levels along both banks of the Breggia.

Sleeping in the Ticino vineyards

Sleeping in the Ticino vineyards