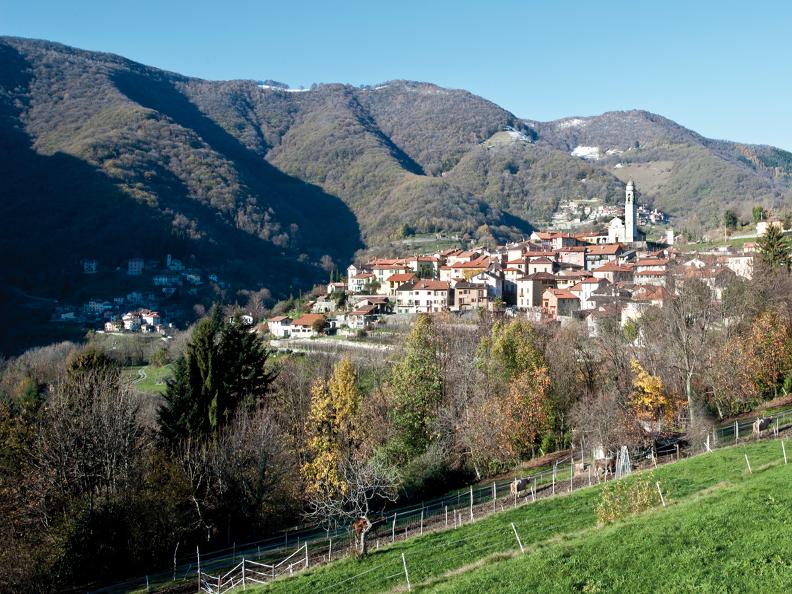 The first mention of Caneggio, a village on the left bank of the Breggia River, dates back to the 13th century (“Canegio”, 1209). The etymology of this place name, which has evolved into various forms of which the first was “Canezio” (1270) is thought to be “casupola” (“cane building”, from the medieval Latin “canecium”, which means reed bed), and is a reference to the unusual materials used to build the houses.

During the Middle Ages, Caneggio had spiritual links to Bruzella from which it separated in 1649, then forming an independent sub-parish annexed to the mother church in Balerna. The 15th-century Church of Our Lady of the Assumption (documented since 1566) has two distinctive features inside. The first is a series of three late Gothic frescoes, the only surviving remnants of a themed composition depicting the twelve months of the farming calendar. The artist is unknown (it may have been painted by Antonio da Tradate or the Seregnesi Masters). The wall paintings still visible today show the months of May (hunting), June (haymaking) and July (threshing). The other striking feature of this church is the canvas depicting the procession of St Charles Borromeo during the plague of 1576. It may have been painted by Paolo Camillo Landriani (Il Duchino, 1560-1618).

Caneggio’s rural economy was based on shepherding and woodland trades, which continued until the mid-20th century. The villagers found other sources of income through periodic emigration and trades related to agriculture such as cheesemaking, which took place in the village’s two dairies: the Caseificio Sociale (1889/1890-1971) and the Nuovo Caseificio Sociale (1919-1961).

Like many other villages in the Muggio Valley, the population of Caneggio gradually dwindled in the aftermath of World War II.

In 2009 Caneggio joined the new Municipality of Campora, on the right bank of the river, which is now under the jurisdiction of Castel San Pietro.