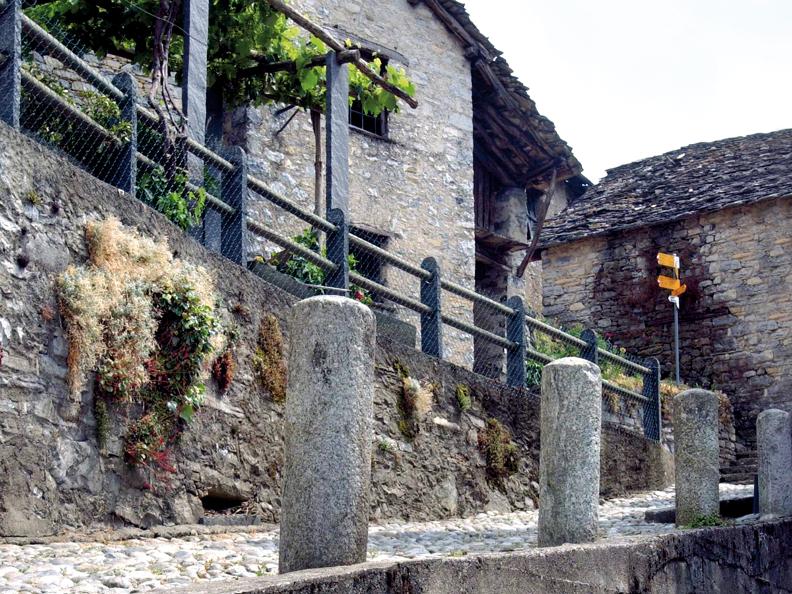 Bruzella is a village that has been inhabited since mediaeval times, built on a terraced slope on the left bank of the Muggio Valley. Until 1609 it had territorial links with Monte, and it had spiritual ties to Caneggio until at least 1649. The village’s main sources of income came from agriculture (and from the windmill on the municipal border with Cabbio, of which records date back to 1298), livestock rearing, cheesemaking, woodland trades (timber and coal) as well as periodic emigration.

The Parish Church of St Syrus (1579) was built in three stages. The first (the main body of the church and the chapels) dates from the 16th and 17th centuries, the second from the late Baroque era when the bell tower was altered and the nave was lengthened (1742) and finally the third stage in 1801, when Simone Cantoni designed the presbytery in neoclassical style with a semicircular choir and octagonal vestry with the symmetrical arrangement of two parallel corridors. Special mention should also be given to the oratory of Our Lady of Loreto, in Zocco, which was visited by pilgrims and was one of the many churches in the Valley dedicated to the worship of the Virgin Mary (such as the Sanctuary of the Our Lady in Bisbino and the church of the Virgin of Miracles in Morbio Inferiore).

During World War II, the Muggio Valley’s position on the Swiss-Italian border made it popular with smugglers and asylum-seekers, including Filippo Scacchi, the ex-director of “Corriere della Sera” who fled fascism and whose memoirs recount the hospitality he received in Bruzella during the 1940s. After World War II and until just a few years ago, the population of Bruzella gradually dwindled due to the socio-economic changes in the region.