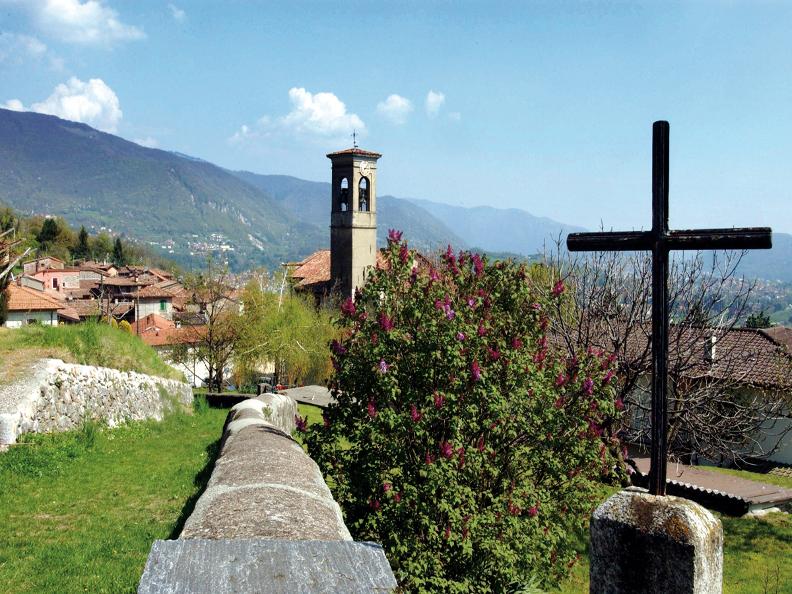 Besazio is first mentioned in a document dated 1254. The settlement was built on a site inhabited since ancient times, as the discovery of numerous archaeological finds dating back to Roman times and the Early Middle Ages prove. According to popular tradition, the name of the village (formerly Besatium or Bexatio, then Besatio in 1335 and Besaccio from the 15th to the 18th century) echoes the name given to the marble quarried on the slopes of Monte San Giorgio: “Belsasso” (literally, “beautiful stone”). In fact, this type of rock is now known as “Besazio marble”, a redder version of “Macchia Vecchia” marble.

Called the “little Siena of Mendrisiotto” by the writer Bianca Colombi of Bellinzona, Besazio first became a parish in 1579 when it detached itself from the parish of Riva San Vitale. Initially, a watchtower and adjoining barracks built on the promontory of Sant’Antonino just outside the town were converted into the new parish church. It was not until the 17th century that the chapel of Our Lady of the Rosary became (and still is) the parish church. This was renovated and renamed the Church of the Immaculate Conception in 1664 and then completely rebuilt at the end of the 18th century.

Throughout the Middle Ages and until relatively recent times, the local economy of Besazio was based on agriculture, seasonal migration (especially of stonemasons) and, of course, the extraction of marble. The latter provided work for many small workshops scattered throughout the region.

Although the population declined rapidly in the first half of the 20th century, it has started to rise again in recent decades. Today, Besazio is mainly a residential area within the Town of Mendrisio, having been re-classed as a town district.