From Afghanistan to Onsernone Valley

Mike has travelled all over the world, but his heart is in Onsernone Valley. In the garden of Villa Edera, the beauty and landscape are enchanting and anyone entering it feels overjoyed.

Here we are in Auressio. We've just passed the beautiful gates of Villa Edera and we're greeted by its owner, who is also the manager of the tourist infopoint and the Wild Valley Hostels, a “scattered hostel” with about 100 beds in Loco, Auressio and Vergeletto. 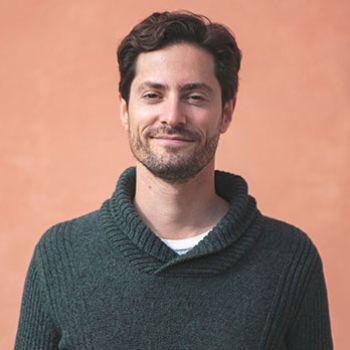 I've been in Afghanistan, Senegal, Chad, the Middle East, but in my heart I always had Onsernone Valley and, whenever I could, I came back to Ticino.

“Here in the valley we're looking for new inhabitants”, jokes Michael Keller, with a nice smile. This is not intended to be ironic. In Onsernone Valley, new people are indeed welcome. There he Right here, Mike has created a network of three hostels that formerly hosted school groups and has given them new life by attracting tourists looking for peace, places to discover... or simply economic sleeping accommodation.

Mike is 36 years old, but he's already seen so many places and so many things that he could be twice that age. Born in Locarno, he grew up in Onsernone Valley, completed his first year of school in Russo and, during school vacations, frequently spent time in the United States, his mother's country of origin. Then, at the age of 7, the big change: he went with his mother to live in Connecticut, between New York and Boston.

“We lived in a typical American suburb, where there is no public transport or even a town centre. I've always missed that”. Mike loves Onsernone Valley and its small hamlets, with their squares and taverns where people tell stories, gossip, bring news or simply have a drink, observing the few cars that pass by on the main road.

Auressio, Loco, Mosogno, Russo, Crana, Comologno, Spruga and, on the other side of the valley, Vergeletto. These are the names of the villages that Mike has commemorated in his hostel in Auressio by decorating with old road signs the stairs leading to the upper floors.

Accompanied by our host's explanations, they allow us to better visualise the valley.

Mike did some internships in various government agencies, but he soon realised that it was not his place: he missed the sincerity of small villages.

On completing his studies, he worked for an association that provided assistance to developing countries and he found himself in Senegal, where he lived for more than 2 years. He then joined the Red Cross and began to live his dream. From Geneva he was sent first to Chad, for one year, and later to the Middle East and, in 2010, to Afghanistan.

At my university, the CIA came looking for new recruits, but I never worked for them.

Mike realised that what he had believed would be his place in life was instead stifling him. The bureaucracy prevented him from applying his enterprising nature.

So, he began to travel around the world with a rucksack and returned to the Middle East opening a hostel for backpackers. But, above all, he began to return more and more often to Ticino in search of the tranquillity and authenticity of his valley.

He too is a victim of the Onsernone syndrome that affects all those who visit the valley and discover its beauty and energy.

This was like a sign of destiny: in 2016, in the peace of an Onsernonese summer, the 36-year old globetrotter met with the mayor and the people in charge of the economic development of the valley; took over the management of the structures in difficulty and, in the following February, he opened a profile on a well-known online platform.

The day after the first reservations arrived. The Wild Valley Hostels was born from the union of the 3 hostels.

The forest reserves in Ticino cover 8,000 hectares and that of the Lodano Valley is a candidate for UNESCO World Heritage Site.
The concept of a “scattered hostel” could also be extended to Corippo and the Muggio Valley, where two projects aimed at widespread reception are underway.
The renewed smartphone app hikeTicino presents over 200 hiking options, 32 of which are selected Premium itineraries.

The hostel with large rooms for groups, but also smaller rooms for families or couples, with a self-service kitchen, but also a restaurant within walking distance is exactly what is needed to satisfy every type of guest.

It is the starting point for wonderful hikes on the trails, and a group of people can hold a seminar or seek inspiration in the panorama or among the vintage objects in the rooms.

In the valley there is now more movement and there is so much to do.
Tourists are attracted by the wilderness, the possibility of discovering trails and beautiful lakes, unique products like farina bona or straw hats and the valley's intriguing history.

“My School was also attended by Bill Clinton and Ivanka Trump.”

“Here there are many opportunities”. Mike is convinced of this. “I feel great here: I see my valley every day through the eyes of a tourist!”

Explore the woods in total freedom

It was a long-cherished dream.