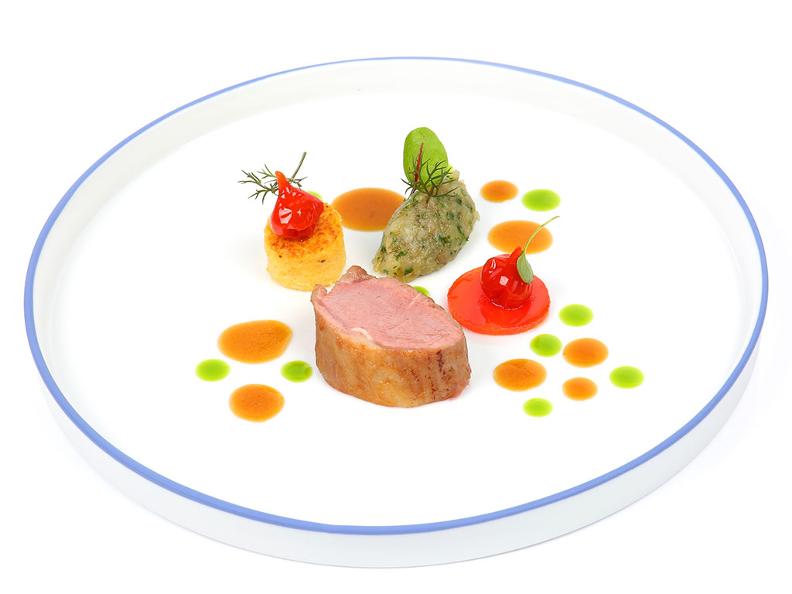 Prepare the lamb, leaving the fat on the back and cutting it finely, salt it and fry it in brown butter until the fat takes on a nice colour. Bake in the oven at 180 degrees for 3 minutes, then leave to simmer in the Holdomat so that the temperature rises again and the meat can rest. Then sauté again in a pan, add the fresh butter, thyme, garlic and lamb. Before serving, spread the pepper pesto on top, add chives and fresh lemon zest and season with fleur de sel and freshly ground pepper.

Heat the olive oil and let the herbs and garlic season it so that it is well flavored. Peel the peppers, cut them round or in any shape you prefer and cook them with the confit method in the oil until they are soft but still have a slight bite. Remove them from the oil, leave both the peppers and the oil to cool. Put the peppers back into the flavoured oil and store. Heat the peppers a la minute in a pan with a little olive oil.

Peel the red peppers and completely dry the peel in Excalibur or oven, put it in Thermomix, stir, add a little olive oil and make a kind of pesto. Season with a little salt.

Cut the eggplant in half, make diagonal cuts on its surface and marinate it with a little olive oil, thyme, garlic and salt. Bake in the oven at 160 degrees for 50 minutes, then remove it and let it steam for 15 minutes.Brown the shallot in a little olive oil until it becomes colorless, add the eggplant and let it cook a little, season with the other ingredients and season to taste.

Boil the milk and poultry stock and season with rosemary, thyme and garlic, leave to rest for 10 minutes and drain. Roast the polenta in a dry saucepan over a gentle heat until a pleasant smell is detected, then deglaze with the herb milk, season, cover the pan and leave to rest for 20 minutes. Heat the polenta again, add the egg yolk and Parmesan cheese and mix in. Spread the polenta on a baking tray and let it cool in the fridge. Cut the polenta and fry it in a pan with brown butter until golden brown on both sides.

Fry the pieces of lamb in a pan with a little oil until warm and colored, add the shallots and mushrooms and fry them. Roast the lamb bones in the oven at 180° C until golden yellow. Deglaze the pan with the alcohol until it is reduced, add the poultry broth and veal jus and bring to a boil, add garlic and cherry tomatoes and boil gently for 20 minutes until the sauce has the necessary consistency. Filter through a fine sieve, bring to the boil again, add herbs and lemon zest, leave to simmer again for a short time and filter.


Serve:
Put the roasted polenta on the plate and arrange the meat next to it, arrange the peppers in a decorative way and put a small amount of eggplant compote next to it. Spread the pesto of peppers in small dots on the plate, pour the jus and decorate with micro herbs.

A recipe by Rolf Fliegauf, chef at the restaurant Ecco at the Hotel Giardino.