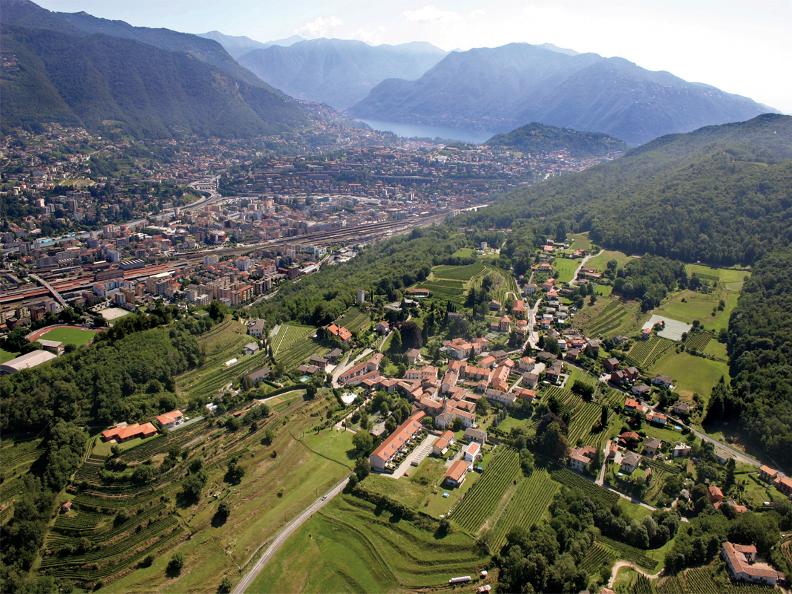 Together with the hamlet of Seseglio, the former municipality of Pedrinate is the southernmost developed area in Switzerland. Officially merged with Chiasso in April 1976, Pedrinate stands on the southern slope of Collina del Penz, a highland situated 562 metres above sea level in the hills of the Lower Mendrisio area and bordering Italy on three of four sides. The villagers have always dedicated their efforts to agriculture and Merlot grapes, which Angelo Baroffio referred to as Pedrinate’s “most typical product” at the beginning of the last century. The vineyards still cover the slopes of Collina del Penz, a hill that has miraculously escaped the major urban growth that characterises the rest of the district.

The earliest signs of human settlement on Collina del Penz date back to the end of the Bronze Age and the early Iron Age (9th century BC). Remains of what has been called the Golasecca Culture may be seen in Como’s Spina Verde Trans-border Park a few kilometres from Pedrinate. Archaeological studies of the Chapel Oratory at Colle di Santo Stefano have confirmed that a settlement at Pedrinate existed around the pagan place of worship even as long ago as the period of Roman domination.

In more recent times, the unique geographical position of the hilltop village played a part in the proliferation of smuggling activities, particularly during the Second World War when the “spalloni” (backpacking smugglers) made their way through the “ramina” (the borderlands between Switzerland and Italy) in the Valico dei Mulini or along trails far from the beaten path, like the “Scala del Pa-radiso” with its more than 900 steps.