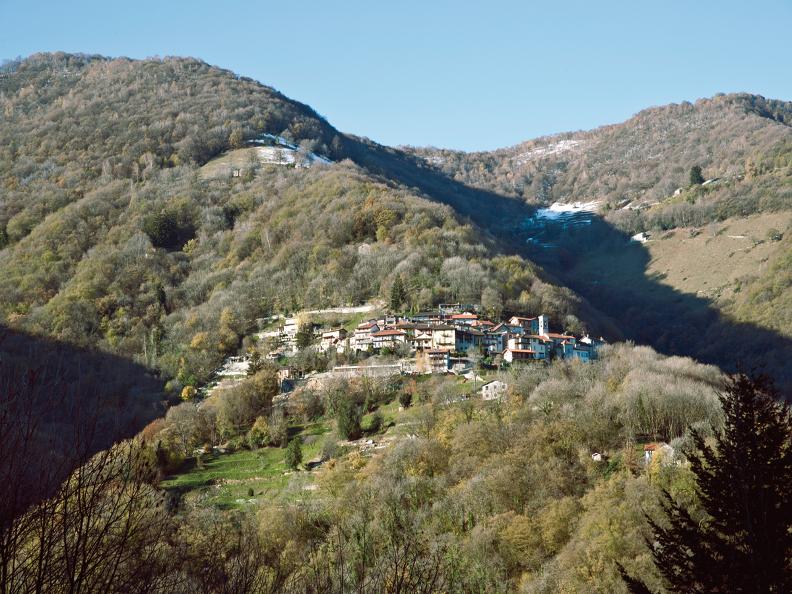 The first historic mention of Monte dates back to 1420 (“de Monte”). The settlement initially formed part of the Community of the Muggio Valley, and was then joined with Bruzella (with the name, in use throughout the 16th century, of Monte-Bruzella), from which it was separated in 1609. Etymolog-ically the meaning of the name of the former Commune (added in 2004 as an outlying district to Castel San Pietro) is understood to be “montem compascuum”, in other words land destined for collective grazing.

Monte is a delightful, notable example of a compact settlement, surrounded by gentle terraced ledges, which are the remains of ancient camps, now invaded by a dense secondary wood. Judicious interventions have enhanced various characteristic elements, such as, for example, the traditional paving and the wash-house complex.

Monte became separated from the matrix of Balerna, and was established as an autonomous parish in 1821, when the church of Sant’Antonio Abate, documented since 1582 and rebuilt between the 17th and 19th centuries, was raised to the status of a parish church. Starting from the 19th century periodic emigration became seasonal.

After the second World War, abetter the profound socio-economic change, we can see, as in all the peripheral locations of the Canton of Ticino, the progressive depopulation, which in the case of Monte ceased in the last twenty years of the 20th century. Apart from exploitation of the woods and the periodic emigration, in the past the economic profile of the village was represented by the main activity of cheese production. Now, however, it is limited to grazing of sheep and goats.

Typical products of the Muggio Valley are tall and short small fresh cheeses, and zincarlin. Prepared from the milk of cows and goats with the addition of salt and pepper, and cleansed almost daily with white wine in order to avoid the formation of undesirable mould during the period of over two months of seasoning, zincarlin from the Val da Mücc recently became the first defence for Slow Food in Switzerland. In 2007, the new product sold by a company with its head office in the Commune of Breggia also won the gold medal in the second national competition for regional products.