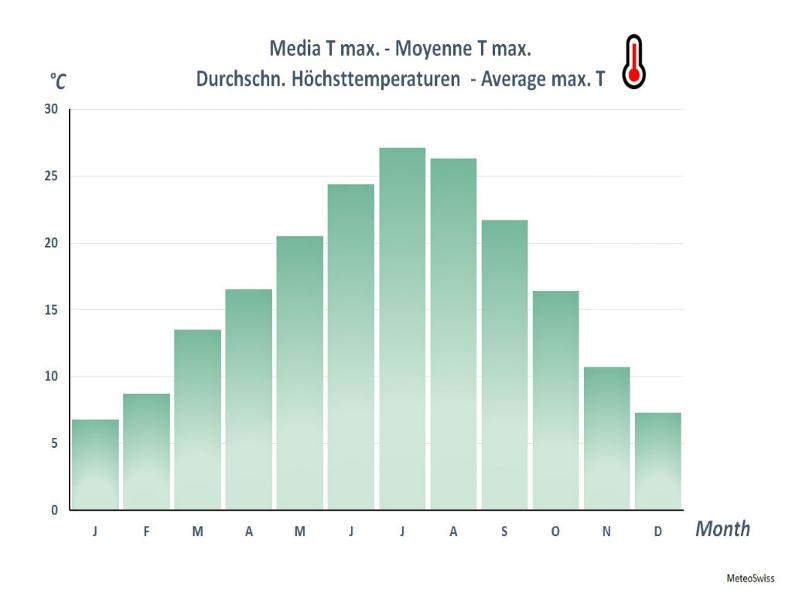 The Canton of Ticino has roughly the shape of an upsidedown triangle with its base facing north and backing onto the Alps whilst the southern tip extends into Italy to a point about 50 kilometres from Milan. The triangle is 100km long as the crow flies with a surface area of 2’800 km2 (7% of the Swiss territory). The location of this region gives it a particularly favourable climate. The territory of Canton Ticino is equidistant from the North Pole and the Equator, in the middle of the temperate zone.

In the region of the lakes the average annual temperature is 12°C, and temperatures are rarely recorded below zero or above 30°C. Ticino is a particularly sunny region. Locarno, in an average year, has more than 2’170 hours of sun, 58% of the possible maximum number of hours. This compares with Zurich which has only 1’693 hours of sunshine and 1’618 in Turin. Moreover, the amount of cloud cover is minimal: 43% in Lugano compared to 77% in Zurich and 65% in Milan.

To the north, in the middle of the Alps, are the imposing mountains with valleys deeply carved out by the ice and rivers which flow south like the fingers of a hand and then join to empty into the basin of Lake Maggiore.

In the centre and south are the regions of the lakes Verbano and Ceresio : a clear and mild atmosphere, hotels, squares and gardens, villages spread out along the water’s edge or peeping down from the hills, and bell towers stretching upwards in the sun.

The southern end of the triangle lies within the Mediterranean zone. The tip of the triangle – the region of Mendrisio - is called the Tuscany of Switzerland because of its gentle and airy landscape, its gently rolling hills dotted with houses and smallholdings and its reddish sunset on mild October evenings.

Naturally some healthy city air is not to be missed, savour a “cappuccino” on the famous Piazza Grande in Locarno, make a cultural visit to Bellinzona and take in some shopping on the streets of Lugano. The towns in Ticino are characterized by the pleasant atmosphere that can be soaked up by strolling by the historical buildings, though the flowered gardens and squares swarming with people.