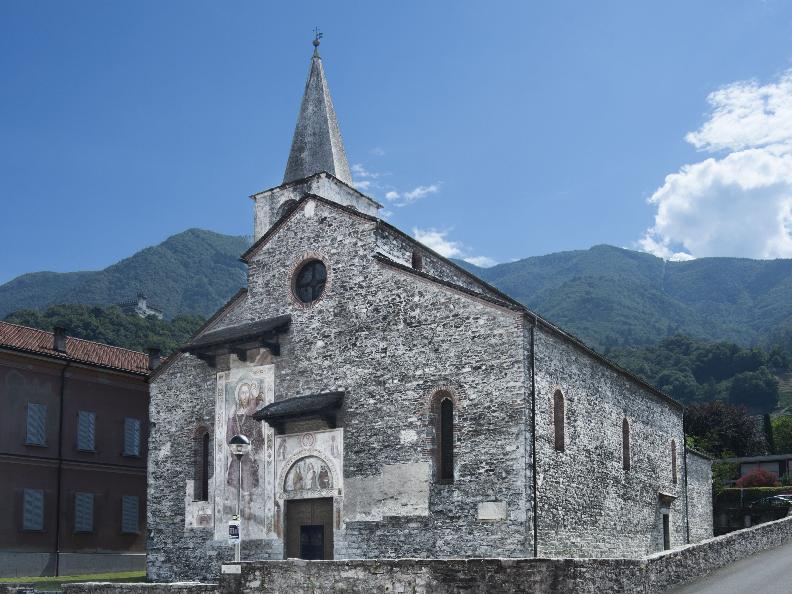 It can be considered one of the oldest churches in Bellinzona, as in addition to dating its origin between the 12th and 15th centuries it is believed that it was built on areas of church buildings that could date back to the 7th or 8th centuries.

The square bell tower was rebuilt in the 15th century. The gabled facade is dominated by a monumental fresco depicting St. Christopher, the work of an unknown painter, Lombard or Sienese, from the end of the 14th century, called, by Gilardoni, "master of St. Blaise". The frescoes of the lunette above the main door and some of those inside are by the same hand, very pleasant for the lightness of the line and the pictorial liveliness.

The interior, with three naves, in addition to the painted walls also has side columns with frescoes, the best of which are those depicting St. Agatha and St. Bartholomew, Seregnese workshop.

On the triumphal arch, Madonna della Misericordia e Annunciazione, by the "maestro di S. Abondio" (1340 circa). In the apse frescoed by the "Master of St. Blaise" are the Evangelists, figures of Apostles, a Crucifixion. To this artist we also owe some saints on the southern wall. The fragment of the Crucifixion, remarkable for its quality and elegance, is the work of an anonymous artist from the end of the 14th century.

On the counter-façade, saints (14th-15th centuries) frescoed by various artists.
On the northern wall, Deposition, a tear from the 15th century, and fragments of a fresco.
Interesting, on the northern wall, a painting of the Virgin and Child signed "Domenicus di Lugano" (1520).
Worthy of note is the granite stoup, the work of local artists from the 16th century.
Transformed several times in the Baroque period and renovated in 1890, the church was restored in 1912 and restored to its medieval form. Later, tombstones from the 16th century were placed on the southern and western walls.