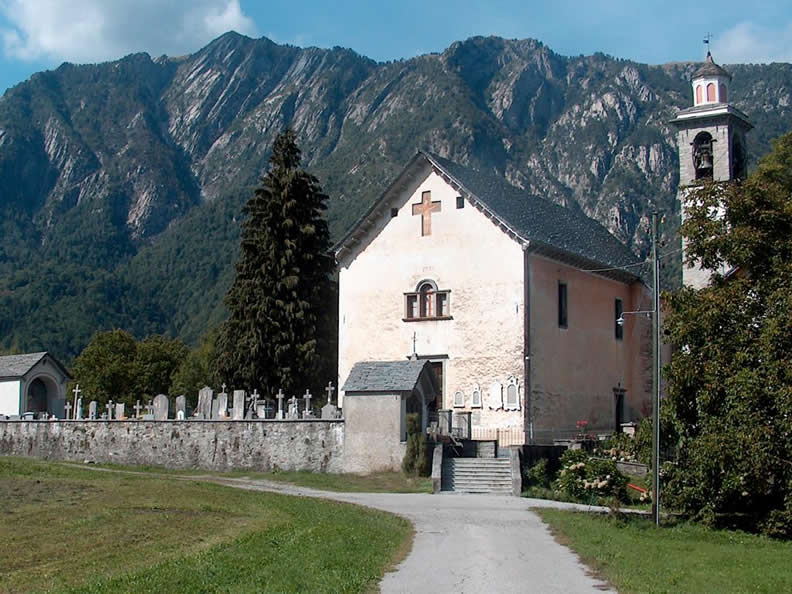 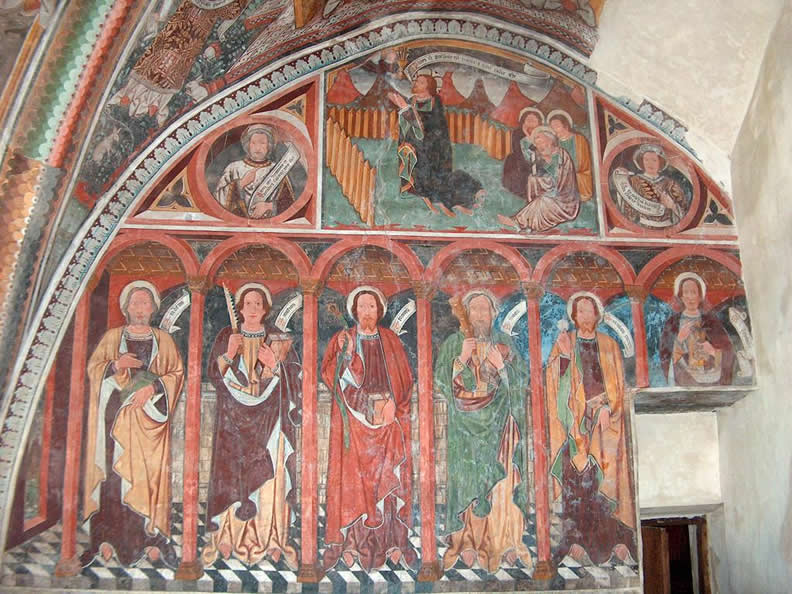 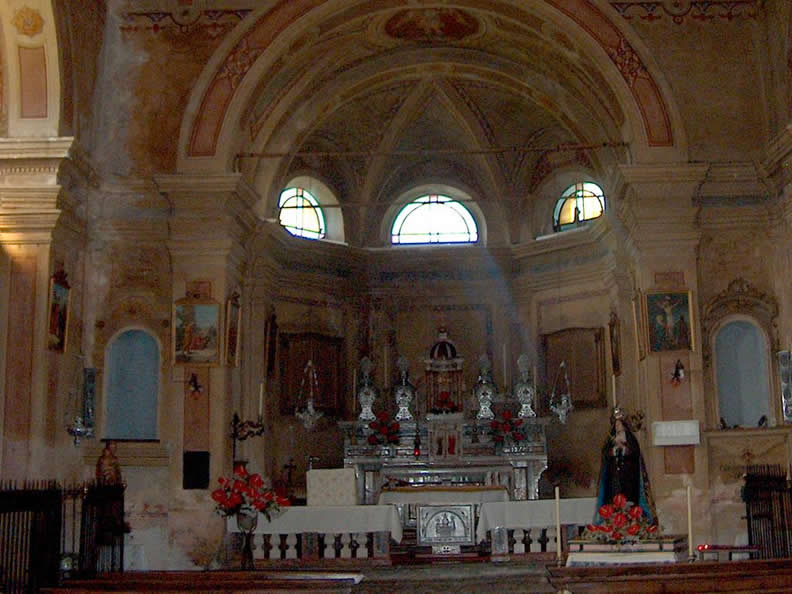 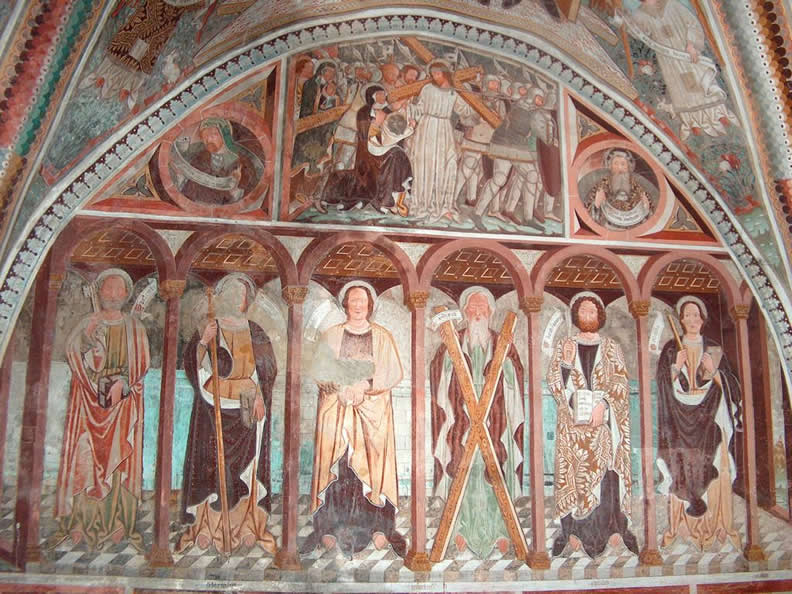 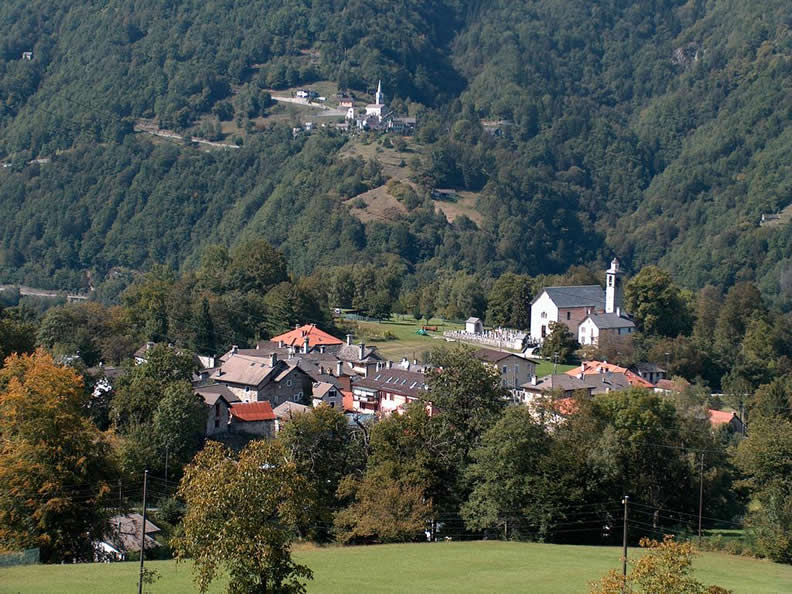 The church of San Michele in Palagnedra, Centovalli cannot be reached by public transport, and as a result the treasures stored within risk sinking into unmerited oblivion. This itinerary offers the possibility of discovering these treasures, preferably by car, which offers the added advantage of being able to admire the sculptures of Alain Garnier on the way. The village is directly above the station, isolated from the village centre three kilometres of tarmac road away.

Situated on a wide knoll 600m above sea level, surrounded by fields and meadows, the church is visible from a long way off. The village has a harmonious appearance despite the juxtaposition of rustic dwellings and town houses bearing witness to the fortunes made abroad by locals who emigrated. Many villagers emigrated to Tuscany between 17thC and 18thC; they worked as porters at the Customs for the court of the Medici Family, and several of them made a fortune.

The church of San Michele Arcangelo (St. Michael the Archangel) rises on the same plateau as the village, some distance away. Surrounded by meadows it seems to be in dialogue with the compact group of houses opposite, to which it is connected by a short road. It was most likely the mother church of Centovalli, probably erected even earlier than 13thC. Written records go back as far as 1231. The present day building dates back to 17thC, a time when the village was enjoying a period of wealth thanks to the successful emigration of some of its inhabitants. The decision was taken to rebuild the church, incorporating the old choir and turning it into a vestry. Although this meant the destruction of some of the lateral frescoes, it also resulted in the preservation of a great part of the series of invaluable 15thC paintings, which have never been erased or destroyed. In 1731 (the date on the façade) another alteration was made to the church, and several further minor interventions over the following centuries. Either side of the door are several memorial tablets, taken from the nearby cemetery. Above them, a serlian window and a crucifix. The bell tower, originally maybe late medieval, was raised during the Baroque era. The cemetery in front of the church has many 19thC tombs, the most noticeable of which are decorated with afflicted figures of Christ, melancholy angels, marble roses and ivy creepers. There is a striking number of members of the Mazzi family present, by far the majority. A chapel in memory of the most famous member of the family -Petronio Mazzi has been built near the steps leading to the church; the rustic stone cross outside the chapel could well have come from the original church. Next to the church is the presbytery. The interior of the church of San Michele is spacious and airy; above the nave is a lacuna ceiling, from 1914. The 19thC neo-classical tabernacle is set in the choir; the four side altars still have the 18thC frontals in chipped stone. A beautiful representation of the Annunciation stands out in the second chapel on the left; it is a 1602 copy of an original in the Church of the Annunciation in Florence. The real treasure of this church is safeguarded in the old choir, which opens out to the right of the main altar. Here you will discover some splendid frescoes from the end of 15thC. Despite their age the colours are still bright and the forms lively, thanks to the artist Carlo Mazzi, whose 1966 restoration work was sponsored by the Fondazione Dietler-Kottmann . Although the original artist's name is only partly legible («anton... tre...»), scholars agree that it refers to Antonio da Tradate, a Lombard painter, very active in Ticino and surrounding areas between the end of 15thC and the beginning of 16thC. He was assisted in his workshop by his son Giovanni and various other assistants. This would explain the large number works attributed to him in this area (Ronco Sopra Ascona, Ascona, Negrentino, Arosio, Santa Maria in Selva in the cemetery in Locarno, to name the most well known) and a certain repetition of themes and figurative forms. Palagnedra is one of the artist's masterpieces; here, he expressed a knowledge of colour, a taste for archaic form, a liveliness of composition and marked sense of realism. Taken as a whole the painting is behind its time, attached to models that had been surpassed, but the artist still expresses his need to update his artistic expression in accordance with the spirit of the Renaissance. In the middle of the choir is a large Crucifixion, with the two thieves, the soldiers , and the Holy Women . On the vault, Christ in the mandorla with the four Evangelists, the doctors of the Church and the patron saint Michele, standing between two other saints -Abbondio and Maurizio, intent on weighing out souls . On the north wall is The Road to Calvary, and on the south wall Prayer in the Garden of Olives. Below these scenes are two rows of six apostles , possibly relevant to the apostolic tradition of supplication for help during pregnancy and delivery. In the lower section the allegory of the months depicts scenes from country life - the grain harvest in June, preparation of wine-barrels in September , chestnut gathering in October; court life is also represented - flowers in April and falcon hunting in May.

After a visit to the church, the itinerary continues towards the village itself. One of the first houses on the left is decorated with 1908 artwork. In front of the house is a walled vegetable garden and tucked into the wall is a niche with religious paintings and votive inscriptions. Opposite is an ornately decorated building, and to the right, Casa Mazzi, the façade decorated by Florentine artists at the beginning of 20thCwith the family coat of arms in the centre. The house was built by Petronio Mazzi (1681-1753), a man with important responsibilities at the Court of the Medici family. Between the two buildings is a path leading to the centre of the village; to the left, a house with several small balconies, one of which is decorated with the arms of the Medici family. The road climbs up to Moneto, opening onto a wide panorama.

On the other side of the valley Verdasio lies to the right, and Borgnone to the left; further up Lionza and Costa. Carry on to the end of the road, where it gives way to a path (about 20 minutes from the village); from there you can see Rasa, Terra Vecchia and Bordei.