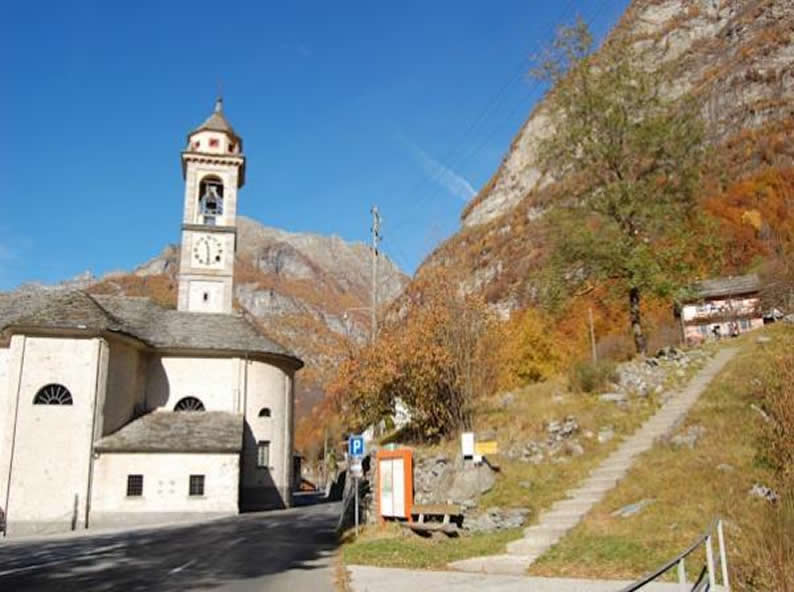 This itinerary is linked together by two elements: water and fire. Water ran the mills and turbines and is a symbol of the ancient driving force necessary for a number of human activities. Fire is the vital source of heat and energy necessary, among other things, to cook food and manufacture lime. And of course one could also metaphorically connect this element to the religious fervour that has been a hallmark of rural life over the centuries. The circular trail has 13 way stations; over and above these way stations, there are three noteworthy points of interest that complete the itinerary. These are the lüera (wolf trap) of Alnèd and the two kilns at the beginning of the Val d'Efra and at the white marble quarry of Benàsc. These points are indicated by the letter "a" and by an arrow showing where the trails lead away from the original itinerary.

Frasco, at about 880 meters above sea level, is the next to last village of the Verzasca region. It is located along the bottom of the valley and it is made up of a number of family dwellings: Torbora, Cantòm, Pé and Scima er Mota (translated, respectively, as "at the foot" and "at the top of the slope"). Once, each hamlet was relatively independent, subject to the influence of a number of families. For example, the various settlements had their own bread oven and their own fountain. At the center of the town is the access point to the Val d'Efra, with its tumultuous stream flowing into a spectacular waterfall. The municipality now has about 100 inhabitants. About 15% of the population works, mainly in the primary sector, even today. Some small holdings mainly raise farm animals (goats and cows) and produce excellent cheeses. In the past, Frasco was a fairly important crafts center, thanks to the use of natural resources. A number of mills, a saw-mill and a few rye and corn mills were water-powered, and the oil-mill provided walnut oil. Linen and hemp were grown and marble was quarried for the production of lime in the kilns which were mainly found in the Val d'Efra. At the beginning of the 20th century the spirit of initiative of the Ferrini family led to an upsurge in tourism, above all thanks to the construction of the Efra hotel, whose reputation spread well beyond the region.