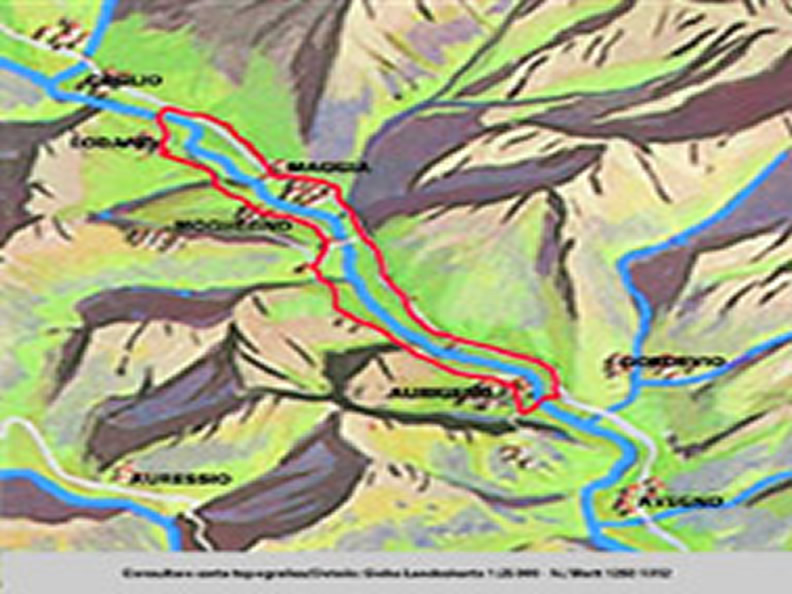 A regular bicycle can be used on this easy level 11km long route, even if it winds along un-asphalted roads. Since it is a circular route it can be begun at many points. This starts at Maggia, in front of the tourist office. Begin by heading toward Lodano on the old cantonal road. Passing through Maggia you will see the pretty Salto waterfall and the church of St. Maurizio. Fifty meters before the old road meets the new one there is a sign indicating the route for Lodano. Cross a woods. At the bridge, which connects Lodano to the cantonal road, follow the indications, which lead down to the river where there is a picnic and grill area. Follow along the Maggia River for about one km. Then take the stretch called the "Torn", passing vineyards and romantic rustic dwellings with a lovely view of the Maggia and the valley floor to Moghegno. Cross the village and continue toward Aurigeno in the countryside. At the border between the two communities turn left and go down to the river again to follow the riverbank. At the footbridge you will join a fitness route for a brief stretch before coming to the schools at the Ronchini di Aurigeno. Head back to Maggia, passing the little church of St. Mary delle Grazie.