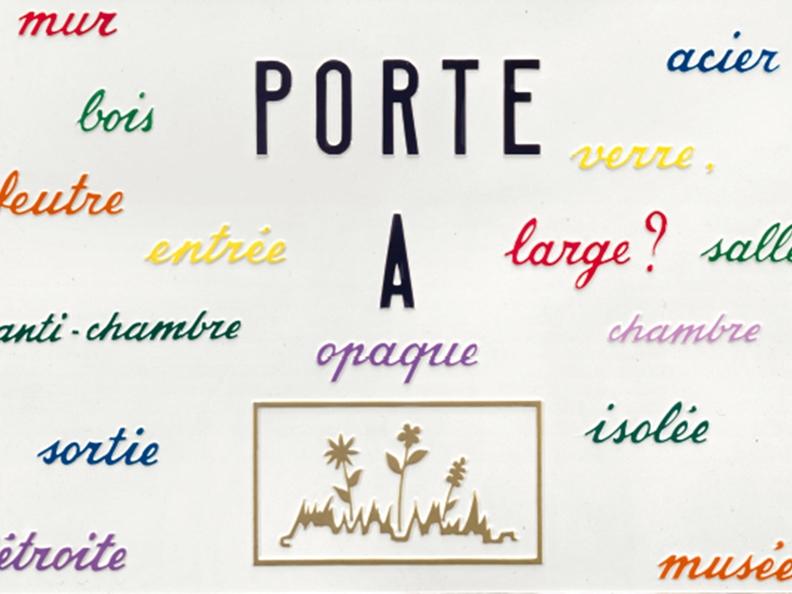 The presents the main motifs of the series of signs created by the artist.

Marcel Broodthaers (Saint-Gilles, 1924–Cologne, 1976) was one of the leading exponents of Conceptual Art, known in particular for having fused Surrealism with the new artistic trends of the 1960s and 1970s.

Inspired by the popular forms of road signs, in the late 1960s he composed enigmatic visual poems on plastic signposts, using symbols, images, letters, words and punctuation marks, but without the intention of expressing a direct or universal meaning. Made with an industrial production process, these plates are defined by the soft contours of the characters and graphic elements that give a tangible quality to the language. In these works, Broodthaers declared that "the image becomes word and the word image", expressing a subtle criticism of the utilitarian use of Conceptual Art and preferring instead his own poetic dimension.

The exhibition organized by the WIELS contemporary art centre in Brussels in close partnership with Marcel Broodthaers’s heirs, will be adapted to MASI’s venue and will present the main 36 motifs of the series of signs created by the artist. The exhibition itinerary also includes several lesser known versions and variations, which reveal Broodthaers’s particular approach to the concept of the seriality and reproducibility of images and artwork. Today these works continue to testify to Broodthaers’s contribution to contemporary aesthetics through the playful and poetic manipulation of language and reality, and endless variations of perception, interpretation and meaning that flow counter to the universal, transparent and standardized signs of technology and IT.