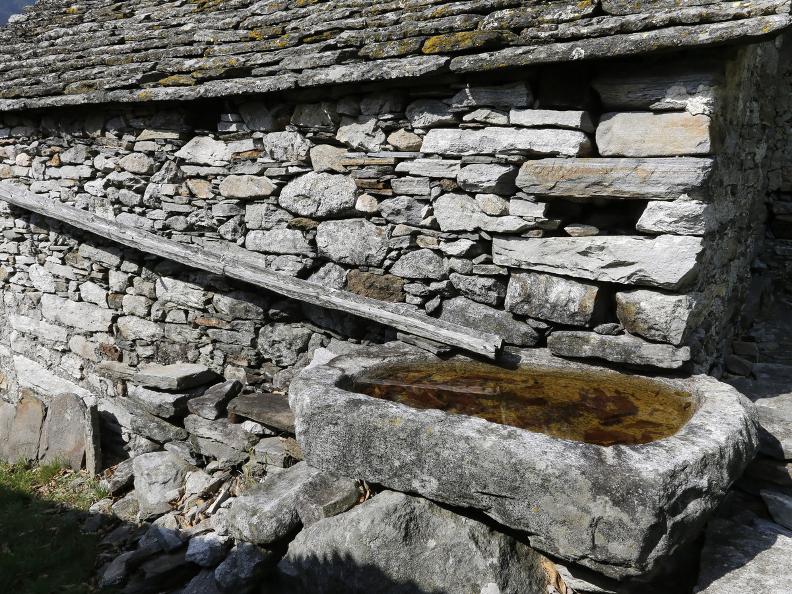 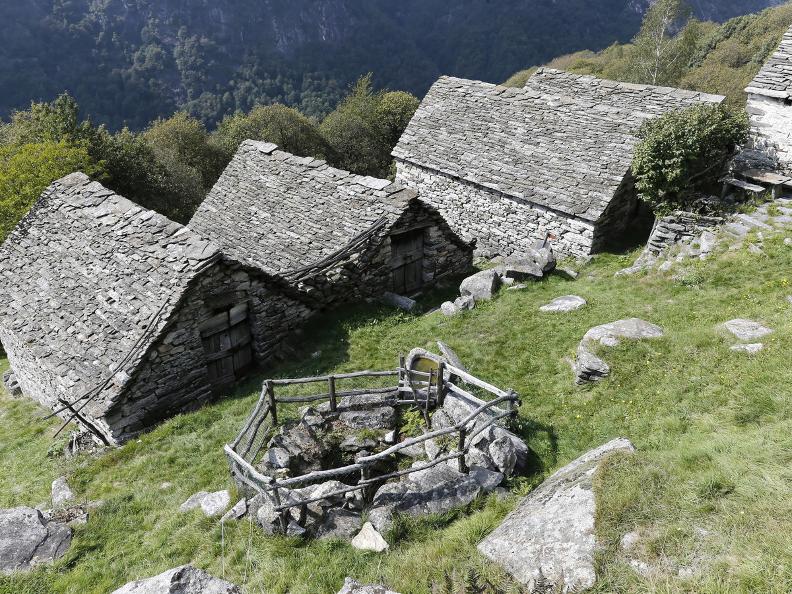 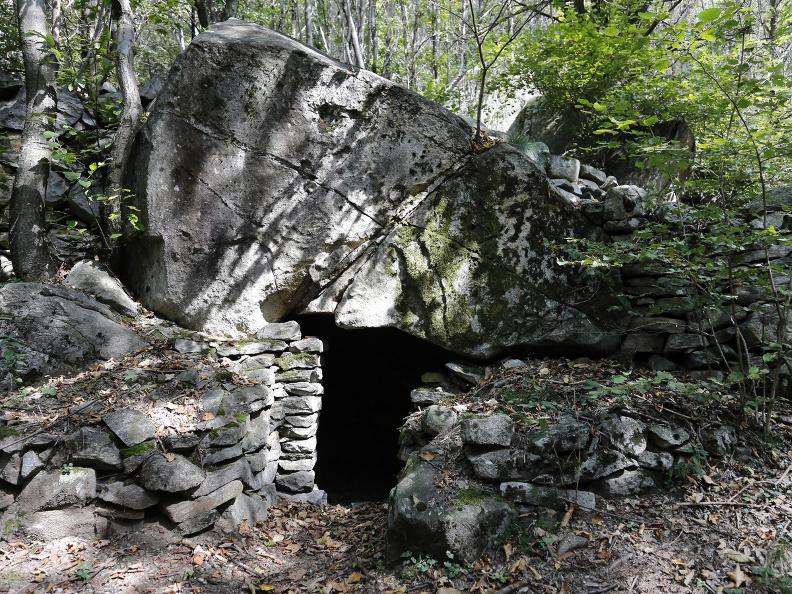 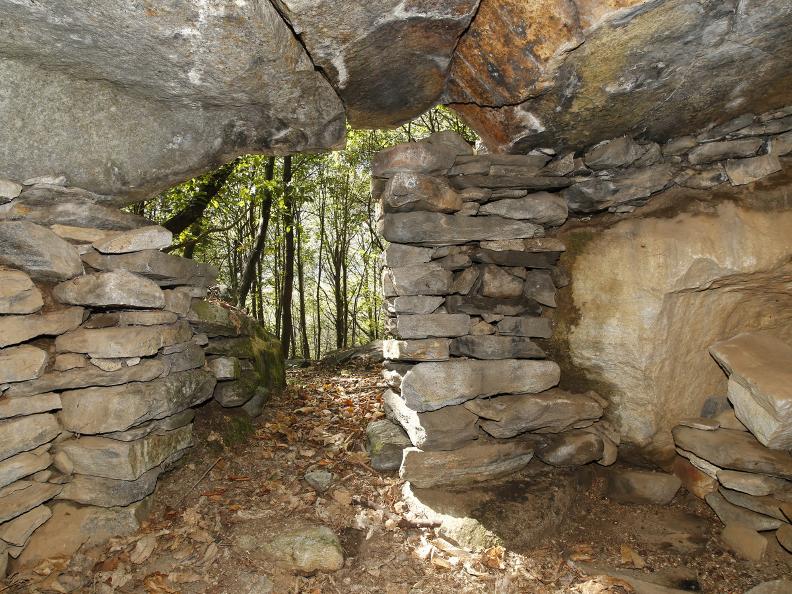 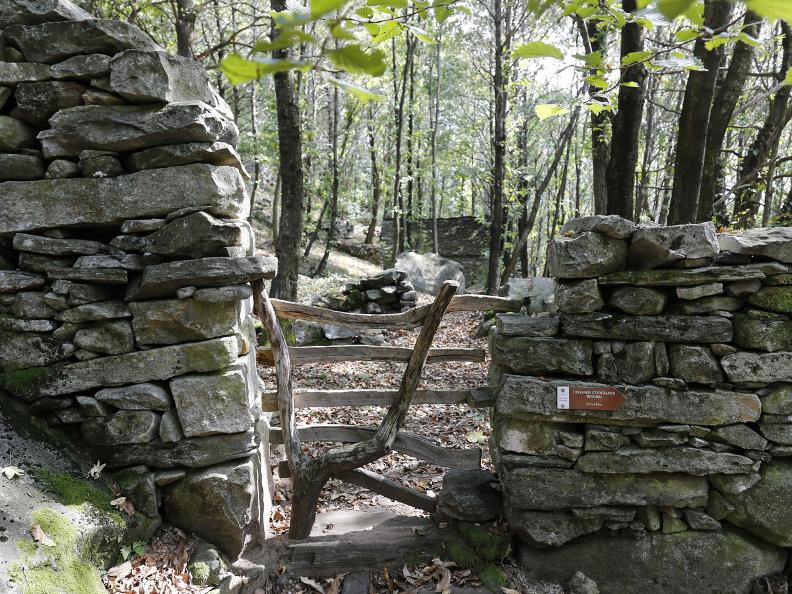 Ethnographic path and the water supply plant of "Revöira"

Samburgaro
After the churchyard of the parish church of Santa Maria degli Angeli with a late-baroque façade, one continues on the cobblestone path leading to Sambugaro. Erected on one of the few flat and inhabited terraces in the past, most of the nucleus today has been renovated. It is possible to catch a glimpse of old houses with large lodges and religious frescos adorning their walls. Nine chapels from the XVII-XVIII century (a number that is usually only found at the valley bottom) between Lavertezzo and Revöira serve as testimony to the profound faith of the local people. The chapel’s iconography typically illustrates the Madonna, a figure for the hopes and prayers of its local devotees.

Scandurásc’a
A half-hour’s walk from Sambugaro, below the path, one can see the ruins of the ancient settlement of Scandurásc’a, abandoned roughly two centuries ago probably due to the unstable terrain beneath it. Despite the thick chestnut woods and the scattered boulders left by a prehistoric landslide, the perimeters of stables, farmsteads and fences or recognizable, all essential elements of an ancient rural nucleus.

The mounts
Following another ten-minute walk, after the remains of the old enclosing walls, one reaches Revöira. Extended over an altitude of about 850 - 1000 meters, the mount divides the five distinct nuclei, from bottom to top: al Mátro, Murísc, ar Cistèrna, Mött dal Cisternign, and Scíma al Córt. Mount Ca d Dént instead occupies a wide terrace on the other side of the usually dry river el Cröis. Although many constructions have been long abandoned, it is still possible to recognize their original function: hay-sheds for the cattle and fodder, habitable farmsteads, rocks for coverage, delimitation walls, and reclaimed surfaces for cultivating cereals, potatoes and vegetables. Further impressive elements are the hollow granite boulders, located all throughout the slope. These basins (35 in total, amounting to a capacity of roughly 4800 liters) were used for gathering rainwater; the wells (6 in total, 3 of which are visible along the path) instead were used for capturing the scarce surface water. This ingenious system guaranteed the supply of water necessary for both household and livestock use.

Al Mátro
Between the stables in ruins, the first monolithic basins are visible. On the open space roughly 50 meters ahead, stands a four-squared structure covered by a stone roof and closed by a wooden door: the first well, which thanks to ist overturned T-section structure manages to hold up to 6000 liters of water. The plain facing the valley, behind the nucleus, was used for cultivating vegetables. The arrival station of a ropeway (batüda ) is also well visible from here.

Murísc
Despite the thick vegetation and the advanced state of deterioration of Revöira’s second nucleus, some facades built with square cornerstones and heavy architraves still stand as testimony for the skilled craftsmanship in the art of building drystone walls. A few meters below the signpost, in front of the ruins facing the river, it is possible to glimpse a granite mass partially chiseled on its surface. Based on its form we may deduce that it was intended to be a basin for collecting water. Exiting Murísc the path forks and continues to the right, up to the higher Revöira, along a transit demarcated by a containment wall one side and heavy slabs on the other.

Ar Cistèrna
Admiring Föpia’s slopes, the impressive mountain above the maggengo, it is hard to imagine the difficulties faced while scything the grass on such a slant. Once the wild hay was gathered it would be carried down to the mounts below – like Odro beneath Pizzo Vogorno, among others – by using a network of ropeways. These systems were employed up to the mid 20th century and parts of them have been preserved, such as the arrival station (batüda) on the northwestern flank of the nucleus. The name ar Cistèrna derives from the well (cistern in local dialect) shaped like a reversed truncated cone missing a lid, situated by the adjacent row of stables. It is the biggest of the entire compound with a capacity amounting to about 12000 liters. A helicoidal staircase allowed its descent in order to obtain the necessary water, which was also used to supply the external drinking basin.

Mött dal Cisternígn
The dates carved on the buildings of this small promontory make the settlement over 300 years old. Inside a stable in ruins, a semicircular well is found with a capacity of roughly 3300 liters. A wooden door kept out the animals, which could drink from the basin near the entrance. From here the route follows the path backwards until the deviation situated at the exit of Murísc, heading towards Ca d Dént.

Cioss dal Gioachin
Not far beyond the el Cröis river stands an impressive enclosing wall surrounding the area referred to as Cioss dal Gioachin. The wall extends all along the higher part of the mount, and used to include meadows and cultivable surfaces before the woods set in. Inside the enclosure, among the tumbledown buildings, a few doorways beneath the rocks (sprügh) are visible.

Ca d Dént
The central nucleus of Ca d Dént is situated a mere ten meters ahead. Unlike many of the decaying buildings – one of which a tower house – the monolithic basins are both preserved intact, and in their original position. We may in fact notice how they are situated next to the building beneath the eaves. A wooden duct carried the rainwater, which fell from the roof. Of particular interest are the two adjoining basins next to the remains of a building at the exit of the nucleus.

The plantation
Up to the late 20th century the woods in Verzasca were intensely exploited for the production of coal and timber, which was sold at  the valley bottom. This practice however made the slopes unstable as it deprived them of their natural protective layer. From Ca d Dént the route descends through a plantation mostly composed of beeches. This plantation dates back to the forties, when reforestation was necessary in order to protect the road below from possible landslides. After a good half hour the path ends as it reaches Motta, at the valley bottom.