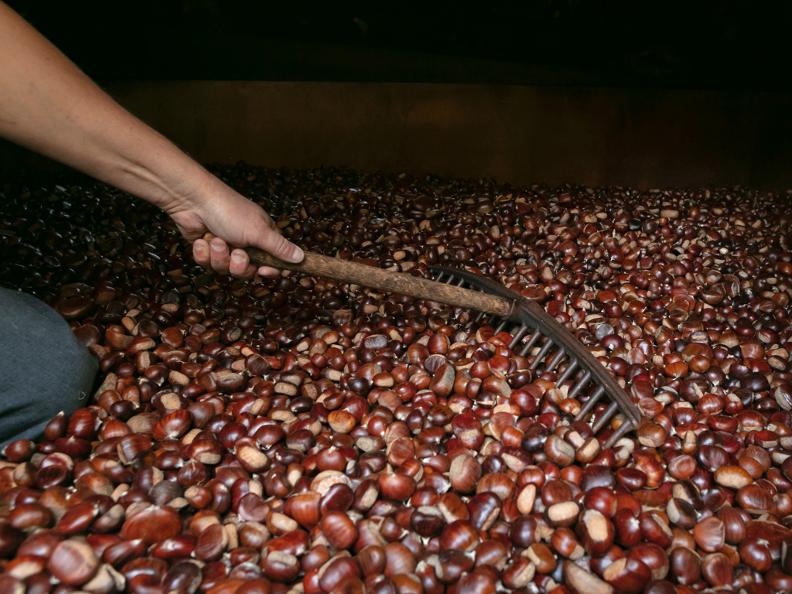 There are a great many traditions linked to chestnuts, and rightly so: although we now tend only to think of them in autumn, when the smell of roasted chestnuts fills the air, chestnuts were once a fundamental part of our diet.

Every year, one of the many traditions at risk of being lost is kept alive at the grà in Moghegno, but that is not all: it is actively passed down to new generations through the involvement of local schoolchildren.


The grà
Chestnuts were a staple food in centuries gone by: their flour was less costly than wheat flour, they were eaten whole alongside vegetables, rice and meat and were added to soups and desserts... However, they were also prone to spoiling quickly due to mould and weevils, so effective methods were required to ensure long preservation. Drying them on a lattice was one of the most widespread methods in Ticino, which is still scattered with gràs – small stone buildings used for drying chestnuts – named after the lattice on which the chestnuts were placed during the process.


The tradition in more detail


The loading of the grà
Once the chestnuts are harvested, they are taken to the grà, where they are weighed and recorded before being placed on the lattice on the top floor of the building. A fire made from chestnut wood is then lit below. In Moghegno, the loading usually takes place between 10:30 am and 12:30 pm.


Drying
Once the grà has been loaded, the longest and most laborious part of the process begins. The fire is kept burning for three weeks. In this phase the most important thing is the heat that develops from the fire, so the flames are partially covered and protected by the chestnut skins from the previous year to prevent them from rising too much. During these three weeks, the chestnuts are turned every three to four days and the fire is checked and stoked three times a day.


The unloading of the grà
After three weeks the chestnuts will have lost a third of their weight. They are ready to be unloaded! The still warm chestnuts are placed in long canvas sacks to be beaten. Traditionally, it was the men who carried out this step, beating the sacks with wooden logs to break up the skins until the sound produced by the sacks began to change. This part is now entrusted to the schoolchildren participating in the project. Once they have been beaten, the chestnuts are placed in the val to separate them from the now powdered skins. The remains of the skins will be used the following year to cover the fire in the grà. The final step involves cleaning the white chestnuts by hand. This step once also served to separate the best chestnuts, intended to be eaten whole, from the broken ones that would be turned into flour. After being cleaned, the chestnuts are returned to their owners at 32% of their initial weight, as they lose more than half of their weight during the drying process.

The unloading of the grà also provides an important opportunity to teach children more about the culture of the chestnut. During the unloading, the school children are involved both in direct activities, such as the beating of the chestnuts, and in educational activities focused around a series of stations that teach them about the history of and fun facts about chestnuts and Moghegno.


This is the ideal time to walk the Moghegno and the grà themed trail and discover the secrets of drying chestnuts in a setting that retains a real flavour of the past.