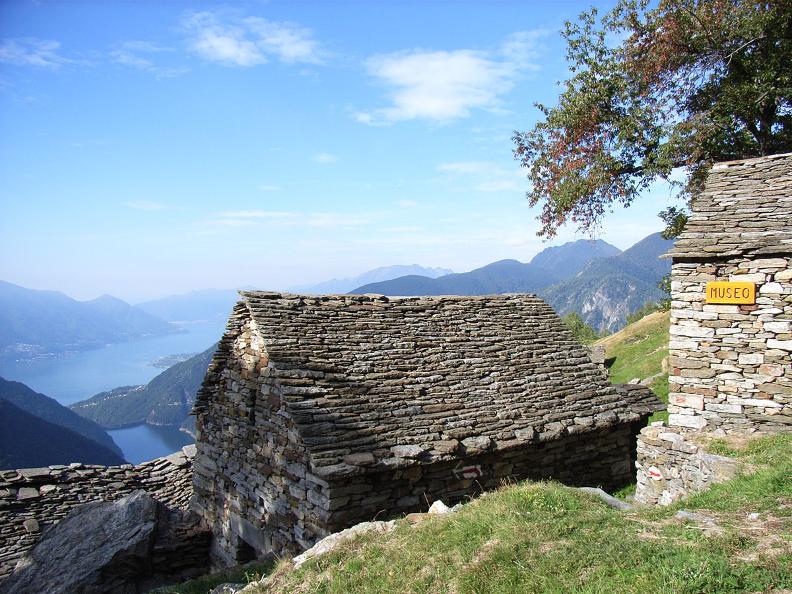 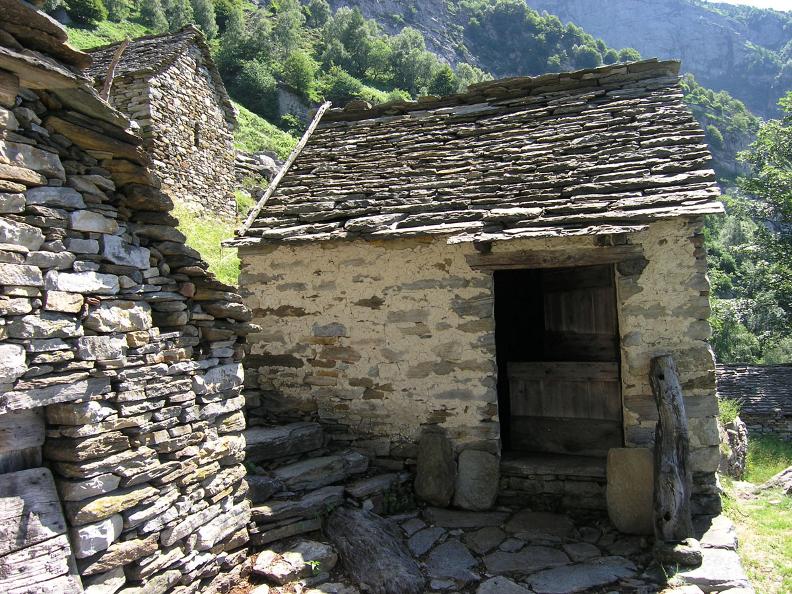 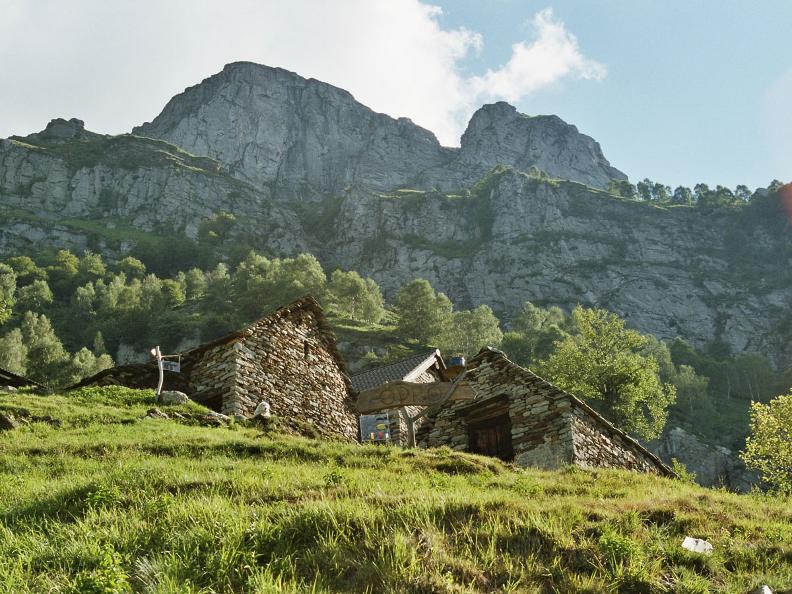 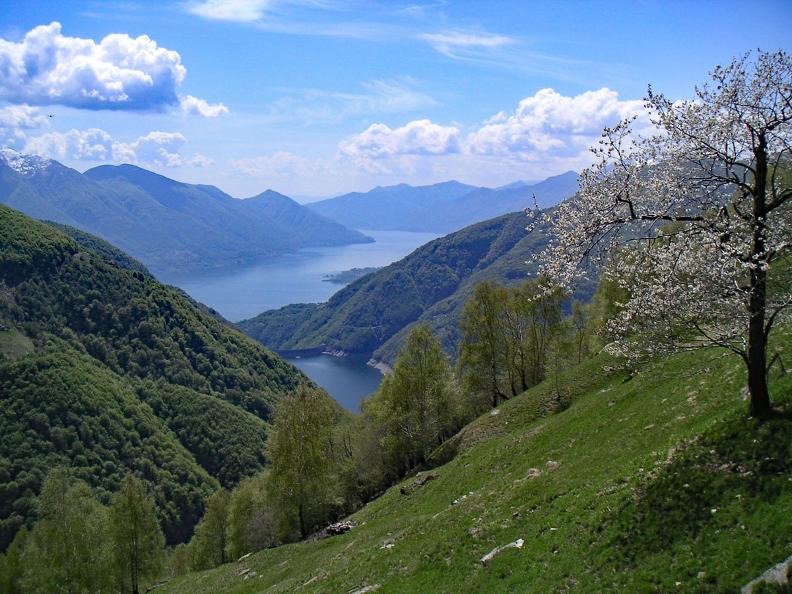 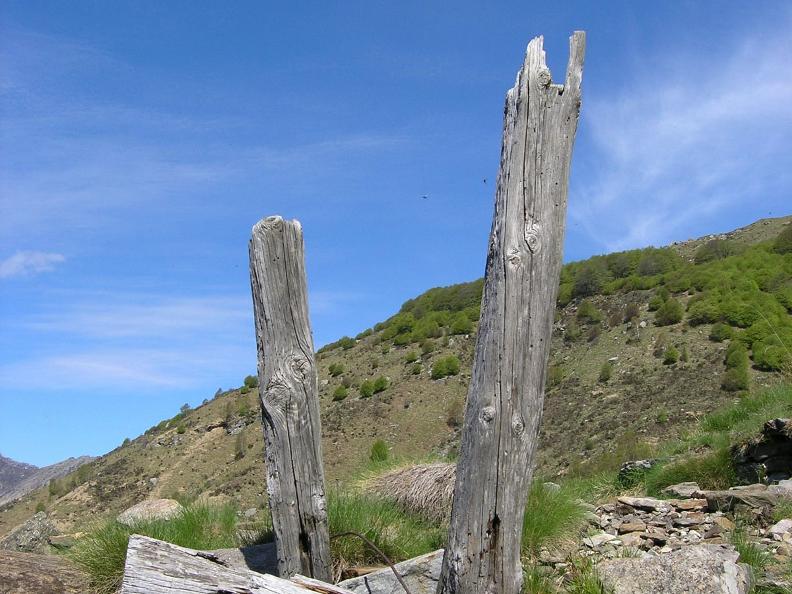 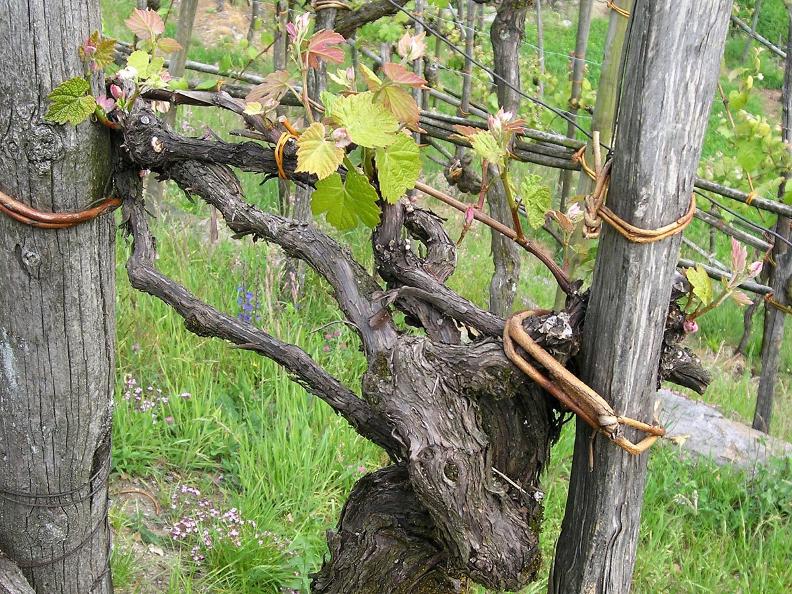 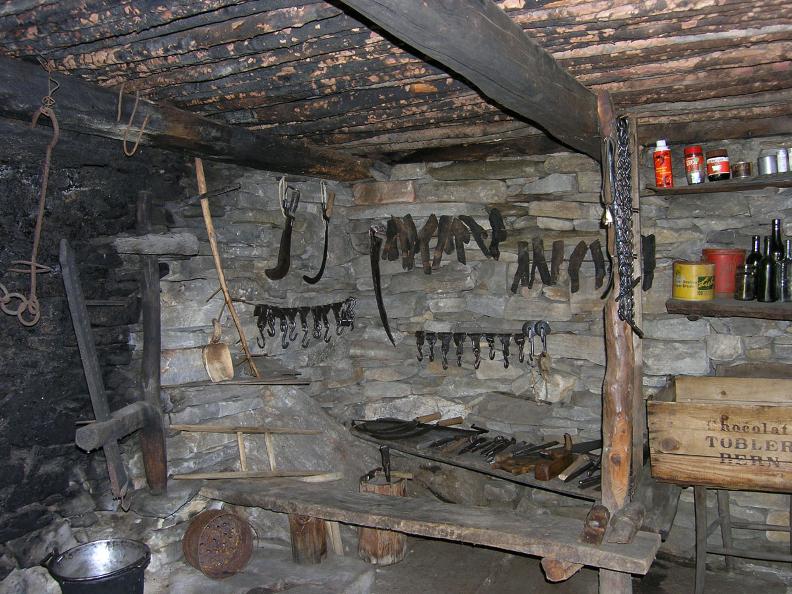 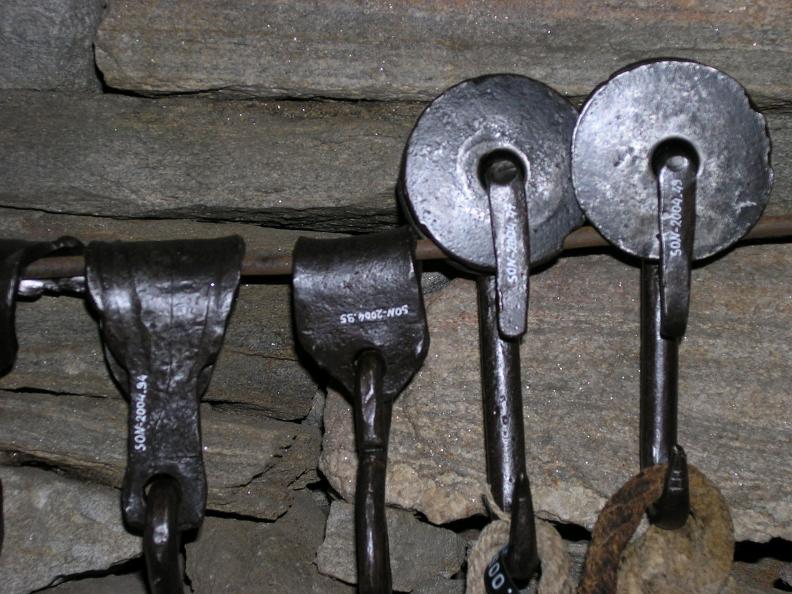 A mountain excursion from Vogorno to Bardüghè via Odro, with a difference in height of 1180 m and with breath-taking views of the artificial Lake of the Verzasca dam and the Lago Maggiore to quicken the heart of any mountain walker.

This trail presents the fascinating vestiges of wild-hay cutting and of the associated land
management practices. Housed in a farmhouse at Odro, the small wild-hay museum is the highlight of the ethnographic trail. The many well preserved elements along the trail are indicative of the meticulousness with which the mountainside was organized to meet the needs of the alpine
economy. The farming activities that take place at Odro and the board and lodging facilities available make this tour a model of ecologically sustainable tourism.

Wild hay and ropeways
Odro was one of the main places in which wild hay was harvested. The steep, craggy slopes of  Pizzo Vogorno, which are inaccessible to large livestock, were scythed regularly up until the 1950s. The wild hay thus harvested was first stacked and then transported down to the mountain pastures or to the village in the valley below by ropeway. The temporary shelters used by the mountain people who climbed the mountains to cut the hay were called sprügh. This system provided fodder for the Zivestock all year round. Traces of this activity can still be seen today: abandoned ropeways, ropeway terminals and paved paths. To shed light on the importance of this activity, here is a passage from F. Binda’s book I vecchi e la montagna (the old people and the mountains), Locarno 1983: “In the olden days, everybody, without exception, would go and cut hay. They scythed the whole of Pizzo Vogorno: imagine that! […] When they stopped cutting the hay, the ropeways went to pot. I used to have a ropeway which was 1000 meters long and almost reached Pizzo Vogorno, at an altitude of 2000 meters; then there were various other ropeways all the way up to Costa Piana.”

Odro
Odro is a rural settlement perched on the slopes of Pizzo Vogorno at an altitude of 1200-1300 meters, situated between the village of Vogorno (500 m) and Alp Bardüghè (1600 m). It is reached via a steep but easy mountain path which runs along a long ridge separating Valle del Molino from Valle della Porta, passing several hamlets along the way (Colletta, Torlètt, Stavéll and Pidoo). Once used as high-mountain pasture-land in the traditional system of exploiting the alp, Odro consists of four small hamlets (Técc Fond, Ticc Zòtt, Sert and Cim’al Prov). Odro’s ancient origins are evidenced by a large rock featuring cup-shaped engravings situated at the centre of the hamlet of Ticc Zòtt and by the dates found on some of the buildings (seventeenth and eighteenth centuries).

Place of Ethnographic and Scenic Interest

1. Mills
The remains of an old mill can still be seen today below the small chapel (see point 2 below), to the west of the stream in Valle del Molino. Around the middle of the nineteenth century there were two working mills, then belonging to the Anselmi family.

2. Chapel and steps
The chapel is situated just past the bridge, at the foot of an imposing flight of steps. A closer look at the hill of Calvary reveals it to be a large stack of hay (mèda in the local dialect). According to various sources, the two rustic wooden crosses (previously at least three) hanging on the walls outside the chapel allude to those who died on the mountains above while making hay. The subject of the painting (the procession to Calvary) and the shape of the hill represented do not appear to be a random choice.

3. Oratory
At Colletta there is a seventeenth century oratory dedicated to Our Lady of Sorrows. The chapel is thought to have its roots in an apparition of the Virgin Mary to an inhabitant of Vogorno in that very location. In the past, the oratory was reached by procession from Vogorno once a year on the Friday before Palm Sunday.

4. Chestnut wood
The path winds its way up through a beautiful wood of majestic, monumental chestnut trees reaching an altitude of 900 m.

5. Ridgeway
This section of the path is a ridgeway. The settlements here were established in locations which
offered advantages in terms of exposure to the sun, flatter land and protection against landslides,
avalanches, flooding etc.

6. Ropeways at Stavéll
As soon as you reach the ridge at Mount Stavéll, you will see the departure and arrival points of various ropeways. The rope leading down into the valley is anchored to a large rock and supported by three poles. There are two terminals: these are the destination points of the ropeways which led down the mountain from Odro.

8. Alpine rural tourism establishment at Odro
Some of the buildings have been restored and, with its “Nera” goats from the Verzasca Valley, the small farm scythes the mountain grassland and keeps the slopes tidy. The delightful, hospitable alpine establishment provides a very welcoming place for excursionists to stop for a meal and spend the night. The site is equipped with a small turbine, which produces enough energy for the hosts and their guests, and a spring, which provides a constant supply of fresh water. Currently the farm is managed by Tobias Bührer and his team.

9. Small wild-hay museum
The highlight of the trail is the small museum in the hamlet of Sert. It is housed in the former temporary dwelling of Luigi Berri (1904-1988), who left the place intact when he stopped working there at the end of the 1960s, leaving behind all his tools and utensils. On display in the small dwelling are the tools which he used in order to perform various jobs, most importantly that of wild-hay harvesting.

12. Alp Bardüghè
At an altitude of 1600 meters there opens up a vast plateau of mountain pasture-land, which was used for grazing livestock in the summer.

13. Beechwood
The primitive, more or less round beechwood— referred to by the toponyms Faisc or Merisg da
Bardüghè—at 1520 m, below the alpine settlement of Bardüghè, is fascinating. The inhabitants of the mountain used to call it the “sacred wood”. This name—very common throughout the alps—may well have a dual origin. On one hand, it could allude to the wood’s function of protecting the inhabitants (indirectly, at least) from avalanches; on the other hand, if the beechwood was really called Merisg da Bardüghè as well, then the wood may owe its sacred, untouchable nature to the fact that it protected nearby livestock from the sun in the hot summer months. Consequently, the “sacred wood” was off-limits for wood-cutting.

14. Monumental chestnut trees
At 900 m the path descends through a wood of chestnut trees, which was deserted several decades
ago and has since become thickly wooded with many types of trees. Here and there are majestic age-old chestnut trees bearing witness to the chestnut woods which once used to cover vast areas of these mountains, especially close to residential areas. The chestnut was once a very important part of the diet and was used in a wide variety of ways, which cannot be included here for reasons of space (more information is available in the interesting booklet about chestnuts by Laura Sofia issued by the Swiss Centre for Dialectology and Ethnography in Bellinzona as part of its “Le Voci” collection). The study by the Swiss Federal Institute for Forest, Snow and Land-scape Research (WSL, www.wsl.ch/sottostazione) also deserves a mention: its aim is to register and study the older chestnut tree specimens, the so-called “monumental chestnut trees”, in the Italian-speaking part of Switzerland. The chestnut tree along the path—unfortunately in quite a bad state—is one of the 310 trees registered by the Institute. By no coincidence, it is located close to the original route of the  path, which went round the tree (the conformation of the ground and various rocks once used as resting places bolster this hypothesis). In addition, it was the tree that marked the entry to more valuable land closer to the settlements. According to the study, as many as 23% of all the monumental chestnut trees registered are to be found in similar settings.

15. Grapevines
Above Costa Piana grow grapevines cultivated to this day using traditional methods. Alongside the
chestnut trees, these old stocks of hardy grapevines complete the plant landscape, which was vital to those engaged in subsistence farming.

With its breathtaking views over Lake Maggiore from the Bardüghe Alp, the hut is reached via a winding but effortless track, makin...

A partially resettled Alpine community at 1240 meters, high above the Verzasca Valley. One reaches Alp Odro from Vogorno via a ste...